I didn’t really know what I wanted to be, apart from ending up as an eccentric millionaire. I had to be a millionaire. If I couldn’t do it without being crooked, then I’d have to be crooked. I was quite prepared to do that.

Although I have an unquenchable thirst for anything John Lennon or Beatle related, these pages have been strangely silent over the last two or so years when it comes to the Fab Four. Patiently I’ve waited for a decent new biography to get my teeth into, and now we have Philip Norman’s 822 page John Lennon: The Life. To do Norman’s mammoth work some justice I’m going to spread my thoughts over more than one post. Besides, I haven’t finished it yet. Also I’m away next week and the heavy hardback will take up most of my hand luggage. I’ll have to wait until November to finish it. 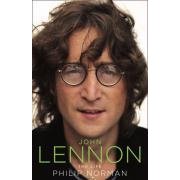 There’s been times when I’ve wondered if I’d ever need to read another Lennon biography. I’ve probably read more than my fair share. Strangely, Norman’s other Beatle-themed book Shout, doesn’t stick in the mind much. Ray Coleman’s two biographies of the 80s are much more memorable, and reading them at an impressionable age I held Lennon in the same awe as Coleman. Albert Goldman’s The Lives of John Lennon is also unforgettable as it paints such an awful, and often unqualified, picture of him. The Hunter Davies Beatle biography from the late sixties is fun, as is Michael Braun’s Love Me Do, fascinating for being one of the first books published about the moptops. But I suppose my all time favourite is Ian Macdonald’s techy but brilliant Revolution in the Head.

So the question remained, did I need another Lennon book? And reading the opening chapters of John Lennon: A Life I began to worry that maybe I didn’t. A lot of the detail of Lennon’s early life was very familiar, especially his schoolboy exploits with his partner in crime Pete Shotton, and could easily have been cribbed together from the selection of titles I’ve already mentioned. However, Norman kept me reading because I suspected he was looking at this life with the canny eye of the historian. He weighs up the facts carefully and does not commit to making sweeping statements, for example not subscribing to the general view that John’s father was a scoundrel, abandoning the boy and his mother and only returning when he smelt money. Norman draws the picture of a much more complicated story, and for the first time reveals John’s father as not being such a black and white villain, but an unlucky man often prone to unfortunate circumstances.

Norman also handles the well worn legends very carefully, trying to avoid the apochryphal tales. The tragic death of John’s mother when she is run over by an off duty policeman is treated without the sensation of some other biographies, as is the other tragic death in John’s early life. The sudden demise of “fifth Beatle” Stu Sutcliffe aged 22 is related without the usual romanticism, which results in making this loss very moving. And Norman is also careful about the Goldman-fuelled rumour that John was indirectly responsible for his friend’s death by attacking him in a drunken brawl. He doesn’t jump to conclusions about what might or might not have happened because we will never know.

The other turning points in the story arc of the early Beatles are treated with similar care. Norman doesn’t give too much time to the sacking of Pete Best, and, like him, I quietly conclude that it was the right decision to get rid of him. Me, I’m a Ringo man. The supposed gay affair between John and Brian Epstein is also played down; there simply isn’t enough evidence to prove what happened one way or the other. What Norman does do, however, is expose the cruel and dark side of Lennon’s nature that is reliably documented; his violent assualt on a DJ friend that was covered up to avoid a Beatle-ruining scandal, the appalling treatment of Cynthia Lennon, the “secret wife”, and Lennon’s countless affairs.

But he was a mixed up fucker and this made him a great artist. John Lennon: The Life reminded me of one of my favourite books about the 1960s, Dominic Sandbrook’s White Heat. This gives a similarly intelligent, well researched and careful account of legendary, fantastic and life changing events. And you can’t really avoid reading the Beatles and John Lennon story just one more time once you start doing so, especially when it’s put together so well.

Of course I’m only so far; the Fabs have only just released their second album With the Beatles. And listening it again today I’m reminded of its charm, sense of excitement and timeless longevity. So turning the pages still only in 1963 I’ve a long way to go yet. I hope you’ll join me for the rest.

I noticed you said you had an unquenchable thirst, for Beatles related stuff, and you also stated you’re a Ringo man, but I’m guessing you have not heard a fantastic new CD that is Beatles related. It’s by Pete Best. He’s made a new album of original material, and I kid you not…it is unbelievably good! It’s called “Haymans Green”, you can check it out on amazon. Do yourself a favor and check it out. You will be amazed!

Maybe you should post a review on Amazon to encourage people to buy it?

I guess it’s come along at a good time for Pete Best to receive some attention – now that Ringo has angered the entire population of Liverpool and announced that he’s going to rip up all of his fan mail. I suspect he won’t be receiving that much anyway now …