I’ve had something of a love-hate relationship with David Cronenberg over the years. The Brood, Scanners, The Dead Zone and The Fly are all great films but I found myself distanced from his later work. It wasn’t that his films were too sickening in their content, I just got sick of Cronenberg wandering into pretentious and unfathomable territory. Dead Ringers, Naked Lunch and Crash didn’t press the right buttons for me. Lately, however, Cronenberg has moved into a new phase of film making. It started with Spider, an unfairly ignored film starring Ralph Fiennes as a disturbed man living in London. The director appeared to be moving away from surreal, experimental and gut-churning imagery to something more naturalistic (although no less disturbing). This continued with the excellent History of Violence, starring Viggo Mortensen as a man haunted by his ugly past, and Mortensen and Cronenberg have recently collaborated again on Eastern Promises, with the actor being Oscar nominated for his performance. 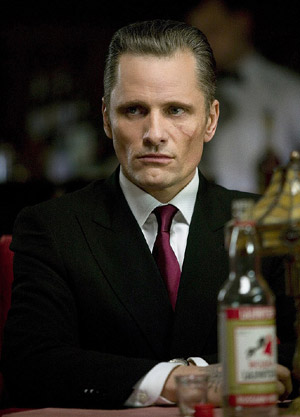 Approaching Eastern Promises by heralding a new, mature phase for David Cronenberg was an unwise thing for me to do. Unfortunately the film was a disappointment, leaving me particularly baffled as to why Mortensen has been praised so much. London is criminally underused as a setting, and the tale of Russian gangsters is totally unconvincing. Even the already much celebrated fight scene, where Mortensen fights off two would be assassins in a steam room, is incredibly overrated. Naomi Watts appears unsettled as the young English nurse drawn into a dark and violent underworld, and many of the supporting actors are miscast and consequently unbelievable.

But Eastern Promises does feature many Cronenberg stamps, where his individual style of film making shines through, and where you think this could only be David Cronenberg. There are some very subtle touches throughout; a new born baby really does look new born, blood soaked and alien to the world. Later this contrasts chillingly with a wasted prostitute, curled into a foetal position. And when he does use London effectively as a backdrop it is very memorable. The dead body washed up by the Thames barrier is one such scene, framed with macabre precision. The best things are all visual, and Eastern Promises makes it clear that Cronenberg doesn’t work particularly well with actors, so when he does settle down into plot and characterisation he fails.

Eastern Promises is therefore an oddity, a new phase for Cronenberg indeed but one he’s not altogether comfortable with. Part of him wants to experiment with the horror genre and part of him, I suspect a much smaller part, wants to make films like this.

I have been looking forward to History of Violence and will definitely not miss it after your recommendation. It’s too bad their second work together didn’t live up to your expectations.

Yes, History of Violence is by far the better of the two.

I miss the good old Cronenberg days. History of Violence was okay, but I had a hard time suspending disbelief. It seemed kind of overwrought to me.