My children were at the centre of my life, circled at a distance by my writing. I kept up a steady output of novels and short story collections, largely because I spent most of my time at home. A short story, or a chapter of a novel, would be written in the time between ironing a school tie, serving up the sausage and mash, and watching Blue Peter. I am certain that my fiction is all the better for that. My greatest ally was the pram in the hall. 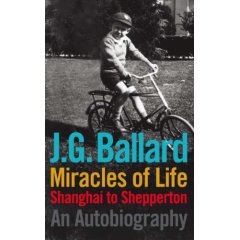 Living with his family in Shepperton, J.G.Ballard published his first novel The Drowned World in 1962. Two years later, his wife tragically died after succumbing to pneumonia on holiday in Spain. The still young writer brought up his three children on his own, filling his days with science fiction between the school run. In his excellent autobiography, Miracles of Life: Shanghai to Shepperton, Ballard remembers raising his children with great pride and affection. This was never a time of struggle of stress, and in his old age looks back to mourn the loss of young children buzzing around him:

But childhood has gone, and in the silence one stares at the empty whisky bottles in the pantry and wonders if any number of drinks will fill the void.

But Ballard doesn’t spend too long mourning what’s gone, and although there are many dark moments in his life, this book is a joy to read. He was born in Shanghai in 1930 and spent the first sixteen years of his life there, several of them in a prison camp when his family were interned by the Japanese during the Second World War. His experiences formed the background for his most commercially successful novel, Empire of the Sun, although anyone familiar with this work should still read Ballard’s new autobiography. It’s a very straightforwardly written yet immensely moving memoir, following his life after the war through medical school, the RAF, family life and success as a writer. He doesn’t dwell on the horrors he witnessed first hand (such as the murder of a Chinese peasant by Japanese soldiers that he stumbles across at a railway station) and he doesn’t try to pry too deeply into the influences that have shaped his writing (surrealism, Freud, the grisly cavadars he encountered as an anatomy student). Miracles of Life reminded me what an unpretentious writer he actually is – and an obviously warm hearted man.

The bulk of Miracles of Life covers the years up to the 1960s; as Ballard grows older time passes very swiftly and the last 20 years are covered in as many pages, although he still manages to include interesting passages on working with Spielberg and his return visit to Shanghai in 1991. There’s also many interesting snippets of his life, such as his volatile friendship with Kingsley Amis and his current literary pals – one of his best friends is Will Self. His oddest associate is probably the young man called Cyril he knew as a fellow internee in Shanghai, who dreamt of changing his name to something more theatrical and becoming a famous actor. Cyril later became Peter Wyngarde, the camp and dashing 60s tv star Jason King.

It might be too early to talk about books of the year, but Miracles of Life is just that – very readable and enjoyable. The final pages, when Ballard reveals the urgency for writing the book, are also very moving. I couldn’t recommend this book enough.

I meant “someone”, not something. Sorry.

Ooo dear, having trouble with your comment facility. What I said — and then got eaten up — is that this book sounds wonderful, and it is lovely to hear someone recommend it so highly (I added it to my wishlist on the weekend).

I’ll look out for your future review (sorry you got eaten up!)

Sounds lovely! It’s much rarer to hear about fathers doting on their kids than mothers, so it’s neat to read about.

I’m looking forward to readin g this as a bit of holiday reading this weekend. I’ve had polarised reviews, so I’ll be taking a second book along, just in case.

Interesting – the only review I’ve read was Saturday’s Guardian which was favourable. Who cares about papers though – I’ll wait and see what the rest of the bloggers think.