In the days to come the frail black rebuses of blood in those sands would crack and break and drift away so that in the circuit of few suns all trace of destruction of these people would be erased. The desert wind would salt their ruins and there would be nothing, nor ghost nor scribe, to tell to any pilgrim in his passing how it was that people had lived in this place and in this place died.

A recent house guest of ours made the remark that they’d put off reading Cormac McCarthy’s The Road because they thought it would be too depressing. I commented that if they found this novel bleak then they should certainly avoid McCarthy’s Blood Meridian. Although I made the observation in jest there is a ring of truth to it; Blood Meridian is similar to The Road in how it reveals human behaviour in times of great hardship, but unlike McCarthy’s more recent novel it delivers little hope to the reader. 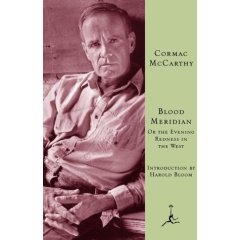 Blood Meridian takes place in the American west of the 1840s, but it is unlike any other recent fiction set in this period. It does not attempt to redress the balance upended by film and print that previously cast the settlers as heroic and the Indians as villains. In many ways the native Americans are depicted as more brutal and inhuman than ever before. This novel attempts no revisionism because its dialogue is caught in its times, gaining its incredible strength because its voice speaks directly, like an echoing ghost, from that earlier period. There is no benefit of hindsight. Its characters and its readers are caught in the maelstrom of events; there are no heroes or villains and few, if any, of McCarthy’s cast deserve sympathy.

Like The Road, Blood Meridian describes a hell on Earth, but this is no imagined post apocalyptic future, and many of the horrific scenes described could be culled from any point in history. Or even from the present – the persecuted of Blood Meridian die when taking refuge in a church, and a similarly appalling tragedy took place recently in Kenya. Whatever setting McCarthy chooses for his fiction, he tends to make the same conclusions. The world is very similar to any fabled description of hell, with an easy path between the two:

I’d not go behind scripture but it may be that there has been sinners so notorious evil that the fires coughed em up again and I could well see in the long ago how it was little devils with their pitchforks had traversed that fiery vomit for to salvage back those souls that had by misadventure been spewed up from their damnation onto the outer shelves of the world. Aye. It’s a notion, no more. But someplace in the scheme of things this world must touch the other. And something put them little hooflet markings in the lava flow for I seen them there myself.

The novel follows a young man, known simply as “the kid”, who is drafted into the army but escapes with his life following a massacre by Apaches. He meets and travels with the Glanton Gang, who include a maniacal, murderous and fearsome character known only as “The Judge”. They embark on a scalphunting crusade which descends into a murderous rampage, becoming more brutal than any Indian tribe (and brutality crosses all time – a quote included in the preface notes that the remains of a scalped victim have been dated at 300,000 years). The Glantons encounter the already dead and dying around them; in one scene they find a snake-bitten horse that resembles something disturbingly demonic. Nearby, a man has been shot and lies bleeding to death, singing hymns interspersed with insults to God. The travellers abandon him but they move away slowly, almost hypnotised by the haunting voice.

McCarthy uses the Glanton Gang, who really did live and breathe in the 1840s, for the basis of his fiction, and Judge Holden may or may not have really existed as well, depending on which accounts you choose to believe. He is cast here as demonic and inhuman, both in his actions and his appearance. All-knowing (he teaches his companions to make gunpowder and appears knowledgeable about many subjects), unrepentant (a possible child killer), a bald, seven foot tall albino – I hoped for history’s sake he never did exist and will remain only a horror of literature. For me, Holden held at least one key to the novel – as the opening quote observes, traces of the past will fade and ebb away. The Judge states that the Earth is an anomily in the universe, the only inhabited planet. He collects sketches in his own private diary, but when copying ancient cave paintings he erases the originals. Holden appears to believe that he can selfishly become all knowing and consequently all powerful. The novel puts this delusion in doubt, although ends on a curious note with him still with the upper hand over those who dare to question him.

Why then read Blood Meridian? Like all of McCarthy’s fiction it is very poetic. It is also a novel that works from the sum of its parts. By this I mean that a series of unconnected passages help to build a very strong narrative, one that works its way under the skin. Written in 1985, it is a fascinating precursor to The Road. Thematically very similar, although the later novel is far starker and briefer in content. Blood Meridian casts man, often depicted as naked, at the mercy of the world’s elements and of his own nature.

At times I think we need to address difficult fiction. This is a book that I will have to reread to fully appreciate and understand. But it’s certainly one to share, and for that reason I would recommend it to everyone. But please brace yourselves.

I just read The Road last week (what a great Christmas present it made), and found that I liked it even better than Blood Meridian, probably because McCarthy’s prose is so stripped that when he stripped it even more I liked it better.

After I read Blood Meridian it took me a few weeks to feel better.

Yes I agree that he can be much more effective when he refines his prose.

And I’ve been feeling slightly off key since finishing it.

Blood Meridian was one of my favorite reads of last year and made Cormac McCarthy my favorite author. It’s definitely a bleak and violent book with no hope. But I thought it was brilliant. I will certainly be reading more McCarthy this year.

McCarthy is one of my favourite authors too, although I need breathing spaces between tackling his novels.

I own this and The Road (among others) but I haven’t read either. I read The Crossing and fell in love with his style of writing—however bleak the messages is. Earlier this year I read No Country for Old Men and can’t wait to sink my teeth into Blood Meridian. Thanks for the great review (found you on Saturday Review of Books).

Thanks for stopping by!

I haven’t read The Crossing but it’s next on my list. Talking of No Country for Old Men, I can’t wait for the new Coen Brothers film.