As a fan of Philip Pullman’s Dark Materials trilogy I was looking forward to The Golden Compass, the film of the first instalment Northern Lights. After seeing it, I wasn’t disappointed or let down, but I wasn’t excited either. It’s something of a Goldilocks film, just okay, and I’m not sure if this makes The Golden Compass good, acceptable or only mediocre. 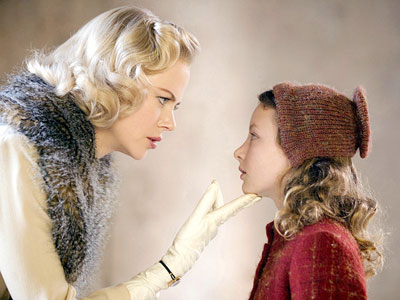 It was my fantasy film expectations that were eventually satisfied more than my literary ones. The special effects were very good, especially the cinematic realisation of Pullman’s daemons, where the people in his alternative world are accompanied by the animal embodiment of their souls. Like the novels, what at first comes across as weird and unsettling is in fact very easy to get used to. By the end of the film you will be looking for the daemon of every new character you see, and judging that very character by their daemon. You will be wary of the ones with dogs or wolves, suspicious of the man with a grasshopper, respectful for Lord Asriel’s leopard and fearful of Mrs Coulter’s monkey.

Nicole Kidman brought life to the Mrs Coulter, who has already lived in my imagination for a long time. From the moment we see her I knew she was going to get the characterisation right, both for me and and for anybody who hadn’t read the books. Kidman let you know right away that Mrs Coulter was one to watch out for. In the cinema, my daughter leant over to me and whispered “she’s bad, isn’t she?” and The Golden Compass does exceed with its choice of cast. There’s the usual company of skilled British thesps, including the excellent Tom Courtenay, Jim Carter and Derek Jacobi. Even Ian McKellen and Christopher Lee, who you would think are growing bored with this sort of thing, make their contribution. But its the lesser knowns who are good too such as Dakota Blue Richards as Lyra. With a bad Lyra this would have been nothing more than a Christmas turkey.

What is strange about The Golden Compass is its confidence that today’s cinema audience can expect their entertainment to be episodic. Weaned on Tolkein and Harry Potter, they consume their films in instalments and, being the first of three, this opening to The Dark Materials goes nowhere. We are literally left up in the air. What’s even stranger is the casting of Daniel Craig as Lord Asriel. Something of cinema’s golden boy since Casino Royale (but a very fine actor nevertheless), you would expect him to have made more than the couple of the brief appearances he makes. No more than a days work for Mr Craig, who still manages, strangely, to have a shave halfway through the film. Was there a continuity problem, or will his loss of beard be explained in the next film?

The Golden Compass has been accused of toning down its take on theology, and coming to it straight from The God Delusion I was interested in seeing what truth there was in this. The answer is that I really don’t think there’s a place for such intellectual and philosophical debate in a family film, and anyway – it’s all there for you to read into. The Magesterium and authority, those who question it and are themselves questioned when they decide to seek out the real truth. Science and religion, those old chestnuts. I’m glad this film didn’t try to spell out any message too much. I was far too busy cowering from Nicole Kidman.

As I’ve said, this could have been more polished and accomplished but it could also have been far, far worse. It’s a film that would have been difficult to imagine pre Lord of the Rings, but it’s also a film that takes this genre (literary fantasy?) and pushes it a touch further forward in terms of visual spectacle. I just hope it’s successful enough to allow the next two books in the trilogy to be filmed, otherwise it will remain an inconsequential oddity. And by the way, don’t rush out of the cinema at the end and stick around for Lyra, the rather excellent theme song from Kate Bush.

I too thought it was a decent-enough film, but for me the beginning and end ruined any dramatic tension — the voiceover at the start giving away the whole plot, inculding the dull description of what dust is and what daemons are; and the fact that the film ended 3/4 way through the book so that you did not get the dramatic balance and power of the two parental showdowns, only one — and for me the fact that Pullman was prepared to go “all the way” on the parent-child relationship was a very shocking and central part of his book.
To me, the religious argument is a side issue as I think that the trilogy is very spiritual. I think that what Pullman is against, in his writing, is organised control – not “religion” per se, but the “thought police” approach.
But, other than these two giant flaws, a decent film.
I part company with you on the music, though- I enjoyed the soundtrack to the movie in a background kind of way, but found the end song too distinct from the themes of the earlier music — bit like Annie Lennox at the end of ROTK, it jerked you back from the fantasy world.

I wasn’t too put off by the beginning. There’s that gap to be bridged between people who know the books inside out and the ones who are saying “what?”. I’m sure, unless my memory’s playing tricks on me, that the Rings films cheated a bit like this as well.
The parent thing I agree, although I’ll need to reread Northern Lights before I think about this more deeply.
Kate Bush! I’m afraid any new music by her gets me excited – similar to the rare treat of seeing Tom Courtenay in anything.