Ha! That disgusted you a little, didn’t it? I caught that little flicker of revulsion on your face. Now you’re trying to cover it up, but you don’t fool me with that oh-so-confident look, as though you knew every secret under Heaven.

In the 1990s, Clive Barker’s Hellraiser films became something of an obsession with me and the guy I shared a flat with at the time. The first 1987 film is one of my horror favourites, and I’ve recently read with some interest that Barker is currently working on a remake, no doubt utilising the developments in CGI to make his creations more horrific, although the most chilling aspect of the films was Doug Bradley’s performance as Pinhead. More disturbing, the actor is now currently reduced to advertising something on the back of buses in my home town, his huge head often ahead of me in the traffic. But sadly minus the pins. 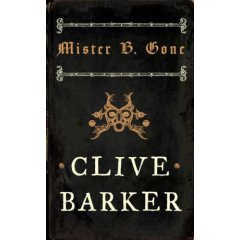 So although he’s always sat somewhere in the back of my mind, it’s taken me ten years to start showing an interest in anything new by Barker. His latest novel, Mister B. Gone, follows the exploits of a particularly loathsome demon in 15th Century England, a backdrop that reminded me at times of Ken Russell’s film The Devils. Human depravity, torture and execution, the actions of mortal man put anything demonic firmly into context. The novel is narrated by Jakabok Botch, mysteriously imprisoned in the pages of the book that he constantly demands that the reader burn. But of course the reader reads on.

Barker’s premise is preposterous, but it is a tribute to his skill as a writer that he manages to just about pull it off. His prose is mostly excellent and so is his skill as a narrator, so no matter how incredible the story becomes Jakabok, rather than enticing you to burn the book, entices you to read on. But be warned; Mister B. Gone does contain some sickening passages of pure unadulterated horror. Although anyone familiar with Barker’s books or films will not be surprised. Or disappointed.

Clive Barker has many similarities with Neil Gaiman in how he uses the foundation that the supernatural world exists in tandem with our own; this is a fact that the reader must accept before they can appreciate how both writers can make the two worlds coexist. You just have to adjust to this seamless integration to appreciate both of these authors. Where Gaiman plunders fairytales and familiar sounding ghost stories to rework in his original style, and often bring them into the modern world, Barker uses the recognisable presence of Hell and The Devil and turns it loose on early society, one that firmly believed in the presence of the demonic, to work his wonders. It’s a conceit that works far better than I would have predicted, with Barker creating a compelling narrator who uses the age old trick of suddenly reminding the reader that they are enjoying something quite horrifying. The novel is peppered with many nudges to the reader similar in flavour to my opening quote.

I was glad when I finished Mister B. Gone, but I didn’t want to burn it. But I also don’t think Clive Barker is really my cup of tea any more; perhaps I won’t find Hellraiser films entertaining any more either… he does what he does very well – but ultimately you have to decide whether or not you need or will appreciate fully what he provides.

This sounds really quite interesting and I might have tried to read it – I like Barker when he’s writing fantasy – so your warning is timely. I know humanity is nasty and depraved, I don’t think I want to read the details, and I’m really not comfortable any more in being made complicit in the nastiness. On the other hand, I’ve never burnt a book before – if I did it, would all the other copies disappear?

GC: It’s Barker’s conceit – and the demon’s realisation – that you won’t. Nobody’s likely to do it any more than burn thier old Hellraiser videos.
But you are right in being complicit in the nastiness – he tends to revel in this a little too much and that’s uncomfortable.

It sounds an interesting idea, but much as I quite obsessively love Hellraiser I’ve never fancied trying Barker in book form. I don’t know why I find the gore easier to take on celluloid.

Eloise: Yes, I feel the same way. I have a favourite list of hundreds of horror films, but very few horror books. And I’m forever trying to figure out why…

A half-decent film is better than a half-decent book at giving you that moment when you know there’s something bad just around the corner but you’re not entirely sure what and your skin starts to crawl.

A couple of books for me which conjure up that frisson of fear would be Stephen King's Misery (bit gory but the dread is worse than the deed), pretty much all of M.R.James' short stories, some of HP Lovecraft's less purple prose.

I'd also recommend Orson Scott Card's book "Maps in a Mirror, Volumn 1 - Tales of Dread" simply for the the introduction where he beautifully defines the different modes of horror (abbreviated somewhat here):

Dread: the strongest kind of fear - the waiting that comes when you have identified that there is something to fear but not what it is

Terror: when you see what you're afraid of - the intruder with the knife etc; but you're now able to act, you're free of the tension associated with 'dread'.

Horror: the weakest fear, this is the grisly relics left behind by the bad thing.

And music as well and other atmospheric tones which require a half-competent film director or an extremely talented writer to pull off, are the sorts of things that best set up dread. Which is why only the best writers can manage this level.

Jack: your comment ended up in my spam bin due to your use of the p word. I fished it out.

I’m weak on Stephen King but I’ll be looking out for the Orson Scott Card book you mention. Thanks for your thoughts. And you’ll see from my next post that M.R.James is back on the scene this Christmas.