Mother died today. Or, maybe, yesterday; I can’t be sure. The telegram from the Home says: Your mother passed away. Funeral tomorrow. Deep sympathy. Which leaves the matter doubtful; it could have been yesterday.

And so begins The Outsider by Albert Camus. Meursault is a young man who is distanced from life; he has a girlfriend, Marie, and a career but remains uncommitted to either. When offered a promotion in Paris he frustrates his boss by failing to react enthusiastically. Similarly, he shows no positive reaction to Marie’s plans to get married and appears to simply drift through his life. It’s far from unpleasant, but he rarely shows that he enjoys it, and his lack of direction or commitment begins to show some worrying signs when he befriends a man called Raymond who rents an adjacent apartment. Raymond is a unsalubrious character who beats women and is pursued by shadowy criminals. He draws Meursault into his confidence who, showing his usual non-committance, is not particularly concerned where this new friendship will lead or the danger it may lead him into. Spending a weekend together with others, Meursault and Raymond run into the latter’s pursuers who attack him. Later, returning to the scene of the crime alone, Meursault shoots and kills one of them. 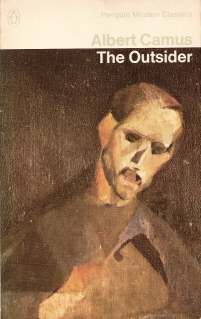 The Outsider is my first taste of Camus and it reminded me of Kafka, where you sink further into the text without realising it. It’s dense and layered, although at first only seeming the simplest of stories. Throughout the novel, Meursault describes the world around him through physical sensations; the heat on the day of his mother’s funeral; the pleasure from swimming in cool water; food and drink. He is baffled by the night long vigil beside his mother’s coffin; it’s the coffee and cigarettes that keep him awake. When he kills the man it is prompted by the glare of the sun in his eyes – an arguably physical reaction. Imprisoned and facing trial for murder, Meursault continues to show his usual lack of emotion. He describes prison life in great detail, but never complains about it. His only concern is satisfying his physical urges – sexual desire and addiction to tobacco. Marie continues to visit him and the visiting arrangements, with prisoners seperated from their families by huge metal grilles, sounds horrendous – although Meursault makes no complaint once he overcomes the physical barrier of managing to converse over the noise of the other prisoners. He gets used to things, however dismal his life becomes. When the trial commences, the prosecution appear more concerned with his lack of humanity to his late mother. Witnesses are called from her rest home and attendees from her funeral. Meursault’s character is torn apart, his coldness towards and abandonment of his mother more cruel in the eyes of those who judge him. They are less concerned with a cold blooded murder than exposing a cold blooded man.

One of the most memorable characters in the book is Salamano, another tenant in the block of apartments where Meursault resides. Salamano takes his dog out every day, cursing and reprimanding the elderly and sick animal. His foul tempered relationship with the dog becomes a source of amusement for Meursault, until the dog runs away and a heartbroken Salamano seeks consolation in him. It’s the only character in the novel who expresses longing and regret for something that’s happened, either from their own actions or those of others. And although Meursault offers him support, he doesn’t really understand, and when facing execution at the end of the novel he finally pours his energy into an outburst against the prison chaplain – a man who suggests he might like to turn towards God for some mutual support.

As well as its obvious debt to Kafka, The Outsider reminded me of the type of drama sometimes referred to as the theatre of the absurd; stark, weird but endlessly readable and open to interpretation. The cover above is from the Penguin Modern Classics 1971 edition (the novel was first written in 1942). Jacques Villon’s painting will haunt me as a vision of Meursault; fading, insignificant, condemned.

Ah, I love “The Stranger.” One of my all-time favorite books. I somehow think I’m the only one in the world who actually thought this book was funny. (Then again, I also laughed during “The Trial.”) I can’t explain why; maybe because Meursault’s entire outlook is so dry and literal, which is something I can really relate to. Or maybe I just have a strange sense of humor.

But the last paragraph of the book floored me.

Hey Brandon – how are things?

You know, I have to admit that I found a lot of it funny too. Meurault’s viewpoint and the situations he finds himself in; the funeral scenes were quite comical.

It’s put me in mind to reread The Trial, and Kafka is another writer who can raise a smile…