28 Weeks Later is the much anticipated sequel to the 2002 film 28 Days Later. Danny Boyle’s original is very hard to follow, mainly due to the outstanding opening scene where the hero Jim (Cillian Murphy) wakes up in hospital and then proceeds to stagger through an eerily deserted London. Westminster Bridge with litter fluttering in the wind, an overturned bus or two. Countless post-9/11 photos plastered everywhere and pleas for the missing.

What’s going on? A rather nasty virus has taken just four weeks to turn everyone into crazed zombies who have learnt the neat trick of moving in fast motion. But don’t turn away just yet. We don’t see these movie monsters until the shots of an empty and silent city are fully milked. And brilliantly executed it is too. How did they manage to film this? How were thay allowed to? Getting up early on a Sunday morning I suppose, and there is the feeling of dawn breaking on a hopeless and bleak new day that comes across very well. New director Juan Carlos Fresnadillo and his crew must have risen really early as the deserted London theme is explored brilliantly in 28 Weeks Later. Tower Bridge, Docklands, The Gherkin are all revealed in their abandoned nakedness.

We get to see a lot more of a startling different and quite beautiful London. In this film, the area has been closed off to starve out the virus, American troops now patrolling nervously as the capital is slowly repopulated. Why isn’t London used more for film locations? I suppose because in the past it hasn’t been done very imaginatively, and I’m thinking of the red bus movies of the 1960s, where producers thought that a red bus appropriately positioned would get bums on seats. Red routemasters = swinging London. Films still continue to use red buses lazily. I loved Atonement, but there is appallingly unimaginative use of red buses to try to convey wartime in London. Come on, at least the bus has to be on its side to be worth including.

Perhaps it’s just too difficult and too costly to film in the smoke; it’s true that Bristol often serves for a more convenient stand-in for film and tv locations. But when it’s done well it can be breathtaking, and another of my favourite recent films is the dystopian gem Children of Men, which uses London to great effect. 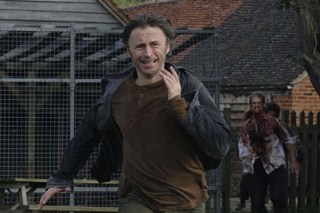 Buses aside, 28 Weeks Later doesn’t try to change anything that was good about the original. It uses the same excellent incidental music and the zombies still run in their fast motion style. As executive producer, Danny Boyle is clearly steering his original vision in new and interesting directions. A theme that’s introduced is that the virus has mutated; in rare cases people can become only carriers of the disease. Which unfortunately leads towards a rather unwelcome outbreak…

What was best about this film, and what made it surpass the original for me, was how it played on real human fears and weaknesses. Donald (Robert Carlysle) abandons his wife to the crazed zombies of the English countryside at the beginning of the film. There’s no question about this; he runs away and leaves her to die to save himself. He’s a coward. He has to live with his guilt and then has to lie to his children about what happened when they are reunited. He tells them that he saw their mother die, although in reality he didn’t hang around for long enough to find out. Standing up to the opening of the first film that I admire so much, it’s an attention grabbing and gripping start.

Carlysle, who you might expect to be the hero of the film, becomes something of a despicible character, and it’s his skill as an actor that makes it so believable. I still asked myself the question would I have run too? And this is what makes 28 Weeks Later a great movie. There’s real and very personal horrors that might catch up with us.

I doubt if it’s over yet though. As Fresnadillo is a Spanish gentleman, and as we get a glimpse of Paris right at the end, I suspect there will be a Euro flavoured film coming soon to complete the trilogy. 28 Months Later?