That long-drawn, wavering howl has, for all its fearful resonance, some inherent sadness in it, as if the beasts would love to be less beastly if only they knew how and never cease to mourn their own condition.

Angela Carter is an author I’ve returned to after nearly two decades, deciding to read her collection of adult fairy tales as part of my quest for the perfect scary short story. Written in 1979, The Bloody Chamber seems defiantly anachronistic for those times. It’s still very modern, very current – and for a collection of fantastic stories – very real. 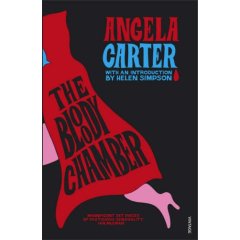 Angela Carter certainly knows her fairy tales. She can take the basic premise and mould it into something far more chilling than anything that would be allowed at a child’s bedside. The title story in this collection tells of a young girl on her wedding night and it involves the usual suspects of fairy tale motifs; badly lit castles and forbidden keys to locked rooms – with a blind piano tuner thrown in for good measure. Carter is good at plunging the reader back into this storybook world before reminding that her fiction exists in the real world too. A telephone will suddenly ring, the dreamlike interrupted by the very real.

The story titles are very suggestive – The Tiger’s Bride, The Snow Child and The Lady in the House of Love all suggest what they deliver. Most recognisable is The Company of Wolves, adapted so magnificently for the cinema by Neil Jordan in 1984. It’s a vivid, weird film – itself I think out of place in the decade it was made – but the original is far more suggestive, impressionistic and – oh yes – scary.

I’m still undecided about The Bloody Chamber. Maybe I’ll have to leave Angela Carter alone for another long spell. In some ways her fiction is too demanding, too strange and ultimately too inaccessible for my simple tastes. Read it though, let me know what you think – let me know what I’ve missed. Or maybe she’s just still out of time…

I loved The Bloody Chamber. I love the way she plays with the original fairy tales and twists them into something much darker and adult (although plenty of fairy tales are dark to begin with I suppose). I can see that she is an acquired taste though…

I loved The Bloody Chamber, too – although I read it a long time ago. You’ve made me want to read it again!

Enjoyed your blog. Just getting going with my own and thought you might be interested in a couple of essays on Carter, one published, one not – they’re at www.katewebb.wordpress.com.