Each person who ever was or is or will be has a song. It isn’t a song that anybody else wrote. It has its own melody, it has its own words. Very few people get to sing their own song. Most of us fear that we cannot do it justice with our voices, or that our words are too foolish or too honest, or too odd. So people live their songs instead.

Recently I’ve become a fan of Neil Gaiman. His short story collection Fragile Things is a contender for my book of the year and I’ve been subscribing to Neil Gaiman’s Journal, one of the best author blogs I’ve seen. Anansi Boys is the first of his full length novels I’ve had the pleasure to read. 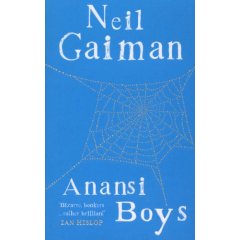 Gaiman in a writer with a distinct style of his own, inventing a world that is always magical and imaginative, and one with a slightly dark edge to it. Anansi Boys follows the adventures of one Fat Charlie who, following his father’s death, foolishly opens the door to his life to Spider, the mysterious brother he never knew he had. Spider proves to be a sibling of nightmarish proportions, bringing annoying aspects of his magical abilities with him. He moves a whole alternative world into Charlie’s spare room and seduces his girlfriend. Just for starters.

Anansi Boys moves between London, Florida and The Caribbean as well as stopping off in other uncharted territories, namely ones invented by the apparently limitless mind of Gaiman. I’ve said this before, but his writing reminds me a lot of Susanna Clarke, who brought us Jonathan Strange and Mr Norrell. He has a similar knack of using the well worn trick of magic in a highly original way. I’m thinking here of the scene where Charlie hails a taxi to take him just a few streets home. The magic weaved by Spider prevents his driver from taking him home, getting more a more lost in just a handful of streets. And Gaiman provides also a very well written scene from the point of view of a ghost.

There are many joys in Anansi Boys. Luckily for me, Neil Gaiman is a highly prolific author, so I’ll be moving on next to Smoke and Mirrors. Can’t wait…

This does sound good. I “discovered” Neil Gaiman earlier this year when I read American Gods and then later Stardust, both such different books from one another. He is a talented writer. I definitely plan to read more by this author in the future.

I recently started reading American Gods. Glad I too discovered him this year. I would like to read more of his works.

Thaks for this review.

American Gods is sitting under Smoke and Mirrors in my pile. I’m also tempted to see the film of Stardust, although I don’t know how far removed it is from the book.

Glad you enjoyed Anansi Boys. I think American Gods is the best of all his books, I enjoyed it even more on re-reading, but I’m happy reading anything by him.

GC: I’m coming round to that opinion too. I’m already into Smoke and Mirrors and it’s fantastic.