The imp grinned down at me from the wooden door, a vivid splash of crimson in the grey gloaming.
I walked around to the side of the playhouse and peered through all the windows, one by one, into the dark and empty room. Nothing moved in there. I wondered if the other three were inside hiding from me, pressed against the wall, trying their damnedest to stifle their giggles. I wondered if it was a big-boy game.
I didn’t know. I couldn’t tell.
I stood there in the courtyard of the playhouse, while the sky got darker, just waiting. The moon rose after a while, a big autumn moon the colour of honey.
And then, after a while, the door opened, and nothing came out.

Neil Gaiman’s Fragile Things is a collection of short stories and poems. It is about dreams, fairy tales, children’s games, urban myths and monsters. It celebrates the art of a good story told well, something that Gaiman shines in as a true artist of the ghost story. 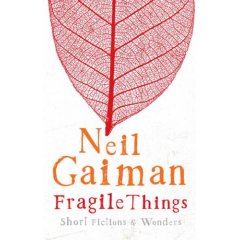 In 26 brilliant parts, this book is almost beyond a review. Subjects include a homage to Conan Doyle with shades of H.P.Lovecraft, a Matrix style sci-fi tale and instructions on what to do if you just happen to find yourself trapped in a fairy tale. And three of the tales were the best short stories I have read in years…

October in the Chair is a tale within a tale. It’s excellently told, and even though it has loose edges this is what can be attractive about Gaiman. He’s unafraid in presenting fragments, stories that are even more chilling in their inconclusiveness. Real scares are not as neatly formed as a comfortable short story. In this story the months of the year take turns in relating ghostly tales. They take a while to settle down, discuss the odd urban myth before a story about a lonely child … and the dearly departed. Fantasy is expertly weaved into this chilling tale, and Gaiman manages to also weave what appears familiar with the truly original.

There are some similarities between this story and Closing Time, from where the opening quote is taken. Visitors to an after hours drinking den in the West End of London again settle into urban legends – one neatly echoing the story from October in the Chair – before embarking on an account of a boys game of dare that becomes mysteriously open ended. It’s effective enough, but Gaiman skillfully stitches on a particularly nightmarish conclusion that keeps just enough back from the reader to truly disturb. He also continues to excel in his Chinese boxes method of storytelling.

Closing Time stayed with me a long time after I’d put Fragile Things down, but my favourite may turn out to be the brilliant Feeders and Eaters, about a particularly hungry tenant in a lodging house, where Gaiman isn’t afraid at all to worry and haunt his reader. The ending made me want to snuggle into my armchair just a little bit more. Then again, I may develop other favourites such as The Monarch of the Glen, about a loner visiting Scotland who foolishly agrees to some unusual overtime…

Fragile Things is such a rich collection that it asks to be read again to be fully appreciated, and Gaiman is a writer that demands to be read full stop. He’s a master that carries the macabre tradition of Ray Bradbury, and comes across as the mischevous twin of Susanna Clarke. Read him – especially as it’s nearly Hallowe’en. My only worry is that Hollywood already has its clutches on Neil Gaiman – I just want him to continue with the short stories that he writes so brilliantly.

I am convinced – I am bookmooching Gaiman this afternoon.

Great stuff! Forgot to mention that he has an interesting blog too:
www.neilgaiman.com/journal

In his previous collection Smoke and Mirrors there is a wonderful story about an old lady finding the Holy Grail – reminiscent of Sylvia Townsend Warner, who was also a great storyteller. Haven’t read Fragile Things yet, but I’m looking forward to it.

I have Anansi Boys next up from Gaiman to read, but I’ll have to check out Smoke and Mirrors as well.

Thank you for the great review, Stephen. I recently picked up a copy of this book while browsing through the bookstore. I am looking forward to reading it.

Anansi Boys is wonderful – hope you enjoy it. I ordered Fragile Things after I read your post!