She’d gently questioned Fleet about his ‘project’ (this matchstick structure now took up the best part of their dining table – his bedroom having long since been evacuated because of the leak). She was especially interested in why it was that he hadn’t completed the cathedral itself before moving on to some of the surrounding buildings.
‘But what about this section?’ she’d asked, standing on the cathedral’s south side, where a large hole still gaped, unattractively, at the entrance.
‘It’s not finished,’ Fleet had murmured.
‘Then finish it,’ she’d said.
He’d scowled up at her. ‘It’s not finished,’ he repeated, as if speaking to an imbecile. ‘They haven’t built it yet.’

After finishing the last of its 838 pages, I’m still torn between calling Nicola Barker’s Darkmans either an effectively clever and creepy ghost story or something of a waste of my time. The stumbling blocks are both the book’s incredible length and its sometimes irritating over-confidence. This is a novel that takes a long time to settle in and – if you’re willing – it will eventually begin to get under your skin and appear worthwhile. But I was still having some doubts about it when I reached the halfway mark, which is a disheartening realisation. There is the nagging doubt that if a book takes so long to even hint at taking you anywhere it might not take you anywhere at all. Darkmans does eventually pay off – just about. 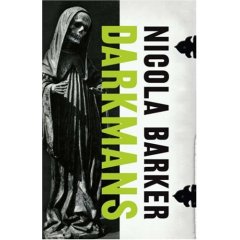 For such a long novel, Darkmans doesn’t have an especially huge cast. The number of characters is no greater than a book of a third of its length. Barker does play with them magnificently though, weaving a very intricate set of relationships. And for such a long novel Darkmans doesn’t have an especially complex plot; it just takes time, it rambles, it appears to go off at inexplicable tangents. Most of all it succeeds in perplexing the reader. What it does do, although sadly much, much less than it should, is be at times extremely creepy and unsettling. Darkmans is a modern day ghost story about the past. How the past is always there, turning up unexpectedly, worryingly, surprisingly. How the past can haunt us. For the cast of Darkmans, the shadow of early modern England hangs over them, a time when the English language was getting to grips with itself and the printed word was in its infancy. What the novel does very well is presenting a danger dating from an earlier time that’s recent enough to make some sense, but is distant enough not to fully understand. In other words, imagine a ghost speaking a less refined version of the English language, references, allusions and most of all motives wildly different.

John Scogin is a ghost with a specifically wicked sense of humour. The last of history’s great jesters, Scogin lives on in surviving biographies and, when his remains are interred to make way for a Channel Tunnel rail link, quite possibly in the consciousness of others. These are notably Isidore, dropping normality to run amok in Kent, and his gifted, possibly autistic, son Fleet. The most memorable parts of the book feature Fleet as he slowly reveals his rather unusual and at times disturbing nature. Five years of age, his precocious talents allow him to build an entire catherdral from matchsticks, and to ponder on the Latin root of random words.

Recurring themes link the past with the present throughout the book, most of them weird and unsettling. Sinister black birds and feathers, bells (in the guise of pet collars and mobile phones), fire (as lighters and matches), roofs and tiles, blood, bruising and – strangest of all – feet – are just some of them. Also unsettling is the indecision about whether this is a dark comedy (we witness a Kurdish refugee with an unusual fear of salads and a dysfunctional family who give Mike Leigh a run for his money) or something altogether more disturbing. Barker won’t let you make up your mind, and won’t tell you what’s really going on until right until the end. Or not – I’m still slightly baffled.

Darkmans was my first taste of Nicola Barker’s fiction. She’s an incomparible talent; her characterisations are detailed and convincing and she can unravel a good plot, if at times slightly over-relying on coincidence. The background is convincingly researched and there’s even a mention in there of Samuel Richardson’s Clarissa, one of the longest novels written in English at 1500 pages. Who knows, Barker might even try to surpass that next time…

I’m glad that this novel is on the Booker shortlist; I’ll be surprised though if it wins. It’s too odd and too experimental and there’s too much left unresolved, but it’s undeniably thought provoking and will give any Booker judge a hard time in justifying their decision about it. Darkmans certainly is extremely baffling and infuriating but – just sometimes – I can accept that as a bold move from a uniquely original author such as Nicola Barker.

You write about this book so wonderfully that I am certainly tempted to give it a try. I like books that make me question my reading experience of them…even if that can be incredibly frustrating at the same time.

Thanks! It was challenging and I did question it several times. In fact I’m still questioning it now … it has turned out to be one of those books that haunt you.

Hmmm … very interesting. I’m not sure whether to give this a try or not — it’s hard to commit to a long book if I’m not sure, but it does sound very intriguing.

Dorothy: I know what you mean. I’m considering another long book at the moment and my experience with Darkmans is giving me second thoughts.

I find myself drawn towards the weirder of the Booker nominees. A few years back it was Cloud Atlas, and David Mitchell is similar to Nicola Barker in some ways.

I am reading Cloud Atlas this month – should be an interesting experience.

Verbivore: another curate’s egg that one! But certainly worth experiencing.