Even though it was thirty-odd years ago, I still have vivid memories of my teacher at junior school reading Roald Dahl’s Charlie and the Chocolate Factory to the class. In all the intervening years I’ve never read the book myself, but was recently tempted to buy a copy for my daughter when I saw that the edition with illustrations by Quentin Blake was back in the shops. 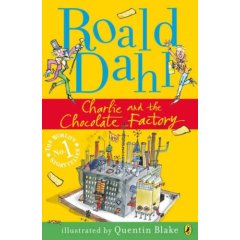 Although Dahl’s books have lasted well (Charlie was published in 1964), and will no doubt continue to last for longer still, I have always thought that he belonged in an older, simpler world. This is possibly something to do with memories of him on Saturday morning television, grumpily obliging to review the latest pop releases. We also have a couple of audio books at home – read by Dahl himself – and his accent and tone of voice belongs in an older time, confidently using words like ‘perambulator’ without fear of being queried.

Some of Dahl’s ideas, and sources for humour, could be questioned by today’s most politically correct. He’s fond of grotesques, especially fat people, and there are many in Charlie. For Dahl, the overweight are overindulged and spoilt; where the half-starved and poor (the Bucket family) are good and noble. There’s something of this attitude or approach surviving in Harry Potter I think; Rowling paints the Dursley’s as fat, overindulged and ugly, with the poor and undernourished Harry surviving in the shadows.

Dahl also likes to push things to the extreme; Grandpa Joe isn’t just old, at ninety six he’s positively ancient, as are the other three grandparents he shares a bed with. When Charlie’s father loses his job in the toothpaste factory the family are instantly plunged into a Dickensian nightmare of poverty, complete with a thick blanket of snow on the ground. Charlie has to leave the house for school extra early, walking slowly to conserve his draining energy.

Then there are the Oompa Loompas, rescued by the eccentric and positively sinister Mr Wonka from the jungle – every man, woman and child – to gladly work in his factory. There’s something slightly unsettling about the presence of Oompa Loompas in Wonkaland, but the book was written in 1964 so it’s foolish to look into it with a too discerning eye.

My daughter loved Charlie and the Chocolate Factory – possibly more so than any other book she’s been exposed to – because Dahl is such a skilled storyteller. At times he’s up there with Dickens (and perhaps Rowling is up there with them both too). The early chapters are cleverly paced and very exciting, even when a child knows the outcome. His characterisation of Wonka, just the other side of sanity, is perfectly measured and I guess – pc or not – the grotesques get their just desserts. After all, it’s just a fun story and nobody can doubt the power of the man’s imagination. There are parts that made me laugh out loud, such as Wonkas’s mad inventions, including the square sweets that look round. Yes, square sweets that look round.

Some of the more obvious warnings in this book now more firmly belong to my parents’ generation, or Dahl’s. He was grumpy on Saturday morning television probably because he he was a book lover and he hated television; who can blame him for that? At least I get this impression by the Oompa Loompa’s reaction to the fate of Mike Teavee:

So please, oh please, we beg, we pray,
Go throw your TV set away,
And in its place you can install
A lovely bookshelf on the wall.

And a word about Quentin Blake – his drawings are fantastic, the acid test being my daughter asking “is there a drawing?” for every scene that suggests an accompanying illustration. Blake gets it right every time.

I’m not very fond of Dahl – I read several of his adult books about 20 years ago, found them repulsive, and then purged all books by him (including Charlie and the Chocolate Factory and James and the Giant Peach) from our bookshelves. But perhaps I was too hasty. Certainly my children have enjoyed the C&CF movie – they might also enjoy the book… .

Actually, I’m so glad you mentioned Quentin Blake – I didn’t even know he was still alive! I like his illustrations, too, and your post prompted me to search the web for books by him and books illustrated by him. We have several, but not nearly enough.

Laura: I was the same – funny isn’t it? His adult books put me off for a long time. It was really Quentin Blake that put me back on track with Dahl but I’m glad it happened at last.