The film of Ian McEwan’s Atonement is a masterpiece – a true cinema classic. 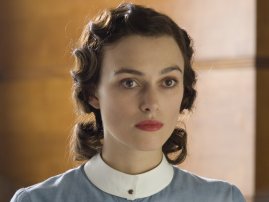 The 2001 novel is a favourite of mine, and Joe Wright (director) and Christopher Hampton (screenplay) lose nothing of the power and potency of the book. In many ways they succeed in improving upon it.

A blistering hot afternoon like yesterday might not be the best time for a trip to the cinema, but I have to take these chances when they come, and besides – like McEwan’s opening chapters the film brilliantly recreates a very similar summer day in 1935. Hot, still days where people think nothing of plunging into cool water; which is essentially what kickstarts the events in Atonement.

A young girl called Briony (Saoirse Ronan) witnesses three incidents that lead her to form conclusions surrounding a fourth. When her cousin is assaulted, she accuses a young man called Robbie Turner (James McAvoy) of the brutal deed. Wright emphasises the strength of fiction in Briony’s word and how her imagination can filter the truth into something else. The sound of typewriters echo through the film’s soundtrack, their sound hammering their importance in this story into us. And is is the typed word that gets Robbie into trouble; when a sexually explicit letter to Briony’s sister Cecilia (Keira Knightley) accidentally falls into Briony’s hands and she later witnesses a sexual encounter between Robbie and Cecilia – in a library, another world of fiction and shaped truths – her imagination goes into overload.

Following Robbie’s arrest the film jumps ahead to the wartime settings of London and Dunkirk. Anyone who has read the book knows to expect that things continue not to be as they seem and Wright really begins to shine here as an artist. The long sweeping shot of troops on the beach at Dunkirk is already becoming something of legend and it really is that good; the scene of Robbie walking through this hell-like vision is breathtaking – visually stunning and also managing to add to some of the intellectual themes of the book. Soldiers play at an abandoned funfair, a broken doll’s house sits abandoned, a ferris wheel turns oblivious to the devastation around it. I want to see this part of the movie again and again to fully appreciate its brilliance.

The film (like the book) will no doubt attract some criticism for its ending, which features Vanessa Redgrave as the now dying Briony, now a celebrated author, in the present day. We’re asked bluntly to think about truth and fiction, what we have just witnessed for two hours, how we would possibly want Briony’s ending to be any different. There is a stunning scene involving the 18 year old Briony (Romola Garai) – now a nurse in wartime London as part of her self-imposed atonement – and a dying French soldier that I think holds the key to the whole story. It’s about misunderstandings and lies, and how sometimes we can do nothing other than give in to them.

What’s best about the whole experience is that a great novel is turned into a fantastic and cinematically clever film. Visually, water plays a part in several key scenes. Cecilia diving into a pond to provide the beginning to Briony’s misunderstandings, Briony jumping into a river to force Robbie to rescue her, a final tragic scene during an air raid in London and the two lovers on an empty beach, embracing as the waves rush around them. This last image one of the most moving I have seen in cinema for some time.

Please see this film – there are excellent performances all round and Joe Wright is a director to watch in the future. It’s unadulterated rich, stunning cinema.

Oh, I can’t wait to see this! I most definitely won’t miss it.

Sounds fantastic. Should I see the film even though I have not read the book? I’ve been wanting to read it for a long time now.

I guess, since it doesn’t come out until December here in the States, I still have time.

Ted: I’m sure you’ll like the book and the film, so read the book first by all means – but it’s not essential to do so.

I was so glad to read your review, having just read a sneer against the movie on Bryan Appelyard’s blog.
I saw the film last week and adored it. I think the book is McEwan’s masterpiece, and the film does justice to it. I found the typewriter music overdone and intrusive, but that was my only minor gripe. The rest of it was magnificent, including Keira K, who does not always act that well but this time she was perfect for the part.
A moving and brave film — prepared to tell the story without making Hollywood concessions.
Wonderful.

What alpine rock do I live under that I didn’t even know this film was coming out! I loved Atonement and I’m so glad to hear you say that the film lives up to the book. I can’t wait to see it.

Maxine: Glad you liked it. I didn’t mind so much about the typewriter music – perhaps it secretly made me feel superior in that I knew what was going to happen (the part fiction plays etc).
And I’m not normally a fan of Keira K. but I also thought she was perfect for the role of Cecilia.
The Appleyard post is very negative, although I’ve found from his Sunday Times articles that I rarely agree with him. But I look forward to reading his blog in the future, so I can fuel my tutting and dislike for his opinions more!

Verbivore: the film kind of sneaked up on me too!

I loved the book (especially the first section) and after your review I can’t wait to see the film. I also had my doubts about Keira Knightly but it sounds like she pulls it off.

Jess: Keira K is a revelation (in my opinion!)