Torbett studied the country out there. The shadows long on the road. Who the hell are these people? he said.
I dont know. I used to say they were the same ones we’ve always had to deal with. Same ones my grandaddy had to deal with. Back then they was rustlin cattle. Now they’re runnin dope. But I dont know as that’s true no more. I’m like you. I aint sure we’ve seen these people before. Their kind. I dont know what to do about em even. If you killed em all they’d have to build a annex on to hell.

For anyone who has recently finished The Road and are looking for another Cormac McCarthy fix I highly recommend No Country For Old Men. This is another helping of McCarthy’s distinctive and highly original prose that immediately grips from the start. There’s also a high quota of bloodshed, some disturbing themes running throughout and one of the most effective literary villains I’ve encountered in a long time. 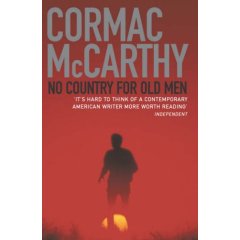 Similar to The Road, No Country For Old Men works wonders with an ostensibly simple story. A Vietnam veteran (the setting is 1980) stumbles across the aftermath of a drug deal that has gone horribly wrong. He finds a suitcase full of money and decides to take it, a decision that immediately causes him a lot of anguish.

After stealing the drug money Llewellyn Moss is pursued by the ruthless killer Anton Chigurh. Also thrown into the heady mix is the laid back and contemplative sheriff Ed Tom Bell. Although a fast moving thriller – at times Chigurh’s determined and tireless pursuit of Moss makes him seem like a distant cousin of The Terminator – this is also a deep and thoughtful piece. McCarthy takes his sleepy Texan setting and slams the modern and ugly world of drug running in its face. No Country For Old Men is also a novel that trips you up just when you think it’s possible to become comfortable following Moss’s life as a fugitive. McCarthy turns the whole thing on its head with a shocking turn of events – and then he does it again with stomach churning effect.

I couldn’t wait to finish whatever else I was doing and get back to this book; it raises the stakes on what can be justifiably be classed as a page turner. No Country For Old Men has recently been filmed by Joel and Ethan Coen and I’ve already heard good things about it. In fact, if it’s anything as good as the novel I’m expecting a masterpiece. I do wonder though how they have turned this into a piece of cinema; whilst the novel at times reads like a screenplay – and McCarthy writes smart, witty dialogue that outstrips anything the Coen brothers have ever written – some may judge the outcome anticlimactic. No Country For Old Men becomes a quiet and resigned rumination on unbeatable and sickening evil and I admire McCarthy all the more for it. He’s brave enough to avoid the happy and neat ending – something that doesn’t belong in this young man’s world.

Intriguing. I have “All the Pretty Horses” by McCarthy on my list, but this book sounds really good as well. I love a good villain. Thanks for your review.

This does sound like it would be an interesting read. Great review.

All the Pretty Horses is next on my McCarthy reading list. I’m also looking forward to a visit to the cinema…