He walked out in the gray light and stood and he saw for a brief moment the absolute truth of the world. The cold relentless circling of the intestate earth. Darkness implacable. The blind dogs of the sun in their running. The crushing black vacuum of the universe. And somewhere two hunted animals trembling like groundfoxes in their cover. Borrowed time and borrowed world and borrowed eyes with which to sorrow it.

Don’t give up on The Road. It’s a bleak, depressing and harrowing book, but it’s still a remarkable work of fiction that deserves the praise it’s received so far, and deserves to be read to the end. 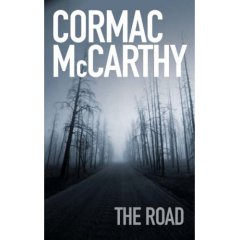 Cormac McCarthy’s novel is set in a post apocalyptic world where the human race is facing extinction. Cities are burnt and abandoned, a sooty ash covers the cold and dying landscape, food and resources are scarce. Amongst this devestation an unnamed man and his young son struggle on, following an endless road in a vague hope that they will find safety, life and the fabled “good guys”. They search and scavenge; for food, tools and shelter and the story falls into a repetitive rhythm as McCarthy describes their endless tasks – filling their cart of belongings, gathering wood for fires, seeking out new hiding places, looking always for useful things. One of the most effective parts of the book is when the man finds a rare object of beauty, an antique sextant from an abandoned ship. After admiring it he simply discards it, an object useless to him in a life only in need of useful things.

The Road isn’t a science fiction novel. We don’t find out what has happened to cause this catastrophe; it’s likely that there’s been a nuclear holocaust – but the conceit of this novel is that we must just accept what has happened. It isn’t a horror novel either, although it contains some of the most horrible scenes I’ve read for a long time. If I had to categorise this book I’d probably fail. It isn’t attempting prophecy; at the most it’s a warning of how easily humanity can slide into terrible depths, those of self-destruction, murder and cannibalism.

What makes this novel work is the father and son relationship. As a parent I found this convincing and very moving; I couldn’t stop whispering to myself “yes, yes, yes” as I read on. Their relationship is just spot on – the father’s protection of his son at all costs, the boy’s endless questioning and need for reassurance, his scepticism and how they deal with the ever present danger engulfing them. The Road asks uncomfortable questions of the reader. How far would you go to protect someone? Would you be prepared to kill or be killed? Because the bond between father and son was so believable I found myself able to consider such questions.

Unhappy reading at times, at others almost unbearable, but I was compelled to read on. I’m not giving away any spoilers here, but if you leave the book unfinished it will be a far bleaker experience for you than if you finish it. Don’t give up on The Road.

Stephen, Another honest and useful review that is really helpful. Thanks for sharing those thoughts. This goes on a ever growing wish list.

Simon: I hope you do get round to reading it. This is one of those books that stays with you; so much so that I don’t think it will go away for a long time. It demands consideration.

This sounds like a really good book. When I was younger, I remember reading many nuclear war aftermath books—”On the Beach” was one, but this sounds better.

I just closed the cover on The Road and wanted to come back and read your review again now that I have finished. A remarkable book and your review is one of the best I’ve read. This was such a dark and difficult story but ultimately very rewarding – on many different levels. I’m going to have to do a lot more thinking about the end, however, because I’m still mulling it over.

Verbivore: thanks for the compliment!

This is one of the most thought provoking books I’ve ever read. It’s also a hard act to follow, and the way it haunts me probably has something to do with my current reading hiatus.

Thanks for the review. I have just finished reading The Road and I found it sad and moving but ultimately a hopeful book. The work of an American master.

I will be reading more by McCarthy in the near future.

Juan: I’ve started No Country for Old Men for my next McCarthy fix…

I’m going to read this for the Saturday Review Challenge!

I finished this book 3 weeks ago. This book will never ever ever leave me. I will have to read it again. I still find myself crying sometimes thinking about it, especially the ending…..... That little Boy was everything to His Pappa…..