Published in 1959, Titus Alone is the last of the Gormenghast trilogy. It takes up the story of Titus Groan, the seventy seventh Earl of Gormenghast, who has forsaken his title and left the ancient castle walls of his home to embark on a very weird walkabout. 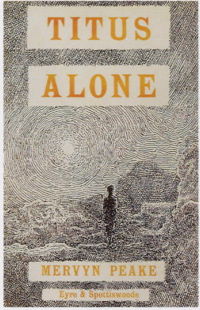 And weird it certainly is. As well as being very different in style and tone, Titus Alone at times inhabits a completely different universe to its predecessors. Where Mervyn Peake’s previous two instalments are set in an apparently pre-technological era, where characters are reliant on natural light and creep around with candles in the night’s gloom, Titus stumbles into an almost futuristic age, complete with space age cars and flying machines.

Titus, exhausted and delirious, discovers an unnamed city beyond the outskirts of his familiar world. In this setting Peake can’t resist introducing more bizarre and eccentric characters, and Titus Alone boasts some of his strangest – such as the zookeeper Muzzlehatch, and the women in Titus’ life, Juno and Cheeta. It’s a dreamlike world, where anything is likely to happen. In the following passage, Titus eavesdrops upon a very peculiar party:

Meanwhile Mr Acreblade was making room for a long-faced character dressed in a lion’s pelt. Over his head and shoulders was a black mane.
‘Isn’t it a bit hot in there?’ said young Kestrel.
‘I am in agony,’ said the man in the tawny skin.
‘Then why?’ said Mrs Grass.
‘I thought it was fancy dress,’ said the skin, ‘but I musn’t complain. Everyone has been most kind.’
‘That doesn’t help the heat you’re generating in there,’ said Mr Acreblade. ‘Why don’t you just whip it off?’
‘It is all I have on,’ said the lion’s pelt.
‘How delicious,’ cried Mrs Grass, ‘you thrill me utterly. Who are you?’

What on Earth is going on? You may well ask. It’s just a very, very odd and outstandingly original work. Just as Titus has forsaken Gormenghast castle, Peake has lost his debt to Dickens for his inspiration. Instead, take a pinch of Aldous Huxley and H.G. Wells, throw them together with a generous helping of Samuel Beckett and Franz Kafka and you’re some of the way to grasping Titus Alone.

This is the oddest of sequels. It has a very post-apocalyptic feel to it (and you can maybe take the near-apocalyptic storm in Gormenghast as a starting point). Recent fiction also owes a debt to Titus Alone, including Martin Amis and Margaret Atwood’s Oryx and Crake. But as a British novel from the late 1950s, the closest of Peake’s contemporaries I can think of is William Golding.

The last part of the Gormenghast saga touches upon experimentation and torture, from the sinister ‘Factory’ to the mind games played on Titus, and Peake’s life was haunted by mental breakdown and illness; he also witnessed the horrors of Belsen first hand as a war artist. Aspects to this complicated man may help to provide a key to Titus Alone – and it’s going to take a good few rereadings before I begin to fully understand or appreciate this novel…