Steerpike was aware, directly he had entered the terrible room, that he was behaving strangely. He could have stopped himself at any moment. But to have stopped himself would have been to have stopped a valve – to have bottled up something which would have clamoured for release. For Steerpike was anything but inhibited. His control that had so seldom broken had never frustrated him. In one way that this new expression had need of an outlet he gave himself up to whatever his blood dictated. He was watching himself, but only so that he would miss nothing. He was the vehicle through which the gods were working. The dim primordial gods of power and blood.

Time for some more Mervyn Peake.

After enjoying Titus Groan so much, I’d been very eager to read Gormenghast, the second book in Peake’s trilogy. It’s an incredible book, which manages to surpass its predecessor in imagination, dark humour, excitement and horror. I’m confidently giving it ten out of ten. If you haven’t read it – I urge you to. 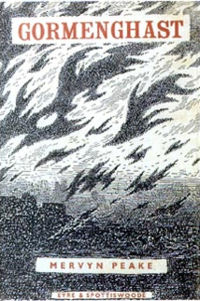 Rather than a sequel, Gormenghast is a continuation of Titus Groan. The first two books in the series fit together snugly like parts of a gargantuan novel that just gets better and better. The setting is still the ancient, vast and labyrinthine castle and we are reintroduced to Titus, seventy seventh Earl of Gormenghast. He’s now seven years old, and the book follows him through his childhood and into early adulthood. The narrative also picks up on the Machiavellian Steerpike, still working his way up through the ranks of the castle, and still resorting to manipulation and murder. Other characters surviving from the first novel include the eccentric Dr Prunesquallor and his very strange sister Irma, Titus’ lonely sister Fuchsia and Mister Flay, former servant to the Earl of Gormenghast.

Steerpike is now assistant to the ancient and formidable Barquentine, Master of Ritual, but plans to dispense with him at the earliest opportunity so he can take over the top job of overseeing the complex and mysterious rules and laws of Gormenghast. The young Titus, for whom these ancient procedures affect mostly, is already tired of the castle and dreams of escape. During his occasional wanders beyond the castle walls, he meets the banished Flay who now lives isolated in a semi-wild existence beyond the boundaries of Gormenghast. Flay is subsequently inspired to trespass the corridors of a deserted part of the castle and discovers the root of an evil that threatens to destroy the very foundations of Gormenghast itself…

Gormenghast manages to be both hilarious and deeply disturbing. I laughed out loud at the scenes involving Irma’s party, when she invites the entire cast of the castle’s eccentric and mostly elderly scoolmasters to her elaborate soirée in her search for an eligible husband. The chapters are as witty as anything Dickens has produced, perhaps even more so. Beneath the humour, Peake can also convey the despair at wasted and unfulfilled lives. It’s undeniably funny, but when Irma does find her match it’s still ultimately a grim life for her. All of the inhabitants of Gormenghast are trapped for life, and amongst them only Titus – ironically the most important of them all – longs to escape from the oppressing stone walls forever.

Steerpike’s descent into total evil provides the disturbing aspect of the book. In order to rid himself of his former accomplices, the mad sisters Cora and Clarice, he simply locks them away in a deserted part of the castle and forgets about them as they slowly starve to death. He’s a cold and calculating as you’d expect the best literary villain to be, and the scenes where Flay unwittingly eavesdrops on the sisters’ horrible fate are genuinely chilling, as are the last minutes of Barquentine’s life. The book is also genuinely moving, and the desperate and sudden suicide of one of the novel’s characters is an incredibly effective piece of writing.

Peake proves himself as a real master of suspense in this novel. He’s mapped out the entire castle in his mind, and brings to life every shadow, deserted corridor and forgotten room. Reading the book, I sat up half of the night racing through the chapters where the suspicious Flay, Prunesquallor and Titus follow Steerpike through the dark, endless and maze-like corridors. Excitement, curiosity and fear are evoked in the reader in equal proportions.

For the reader, The most satisfying aspect of Gormenghast is finally being able to decide on the heroes, villain and victims of the piece. Prunesquallor, only really a comic character in the first part, becomes believably and admirably heroic in the second, and Steerpike, although undeniably wicked, is always strangely compelling. We share his desires, his motives and his successes. And let’s not forget Fuchsia, who – although subtly drawn – is still one of literature’s truly tragic figures. I’ve still the last part, Titus Alone, to finish. I urge you to catch up with me and start reading now. It’s a work of genius.

Stephen with a passionate recommendation like that I am going to get it down off the shelf and give it a go.

Simon, I look forward to hearing what you think.

I first read the trilogy when I was 14 – that was 32 years ago. I loved it, and recently tracked down copies of Peake’s novels to reread. I enjoyed your review immensely.

Thanks Laura. I don’t know why it took me so long to get round to reading Peake – but I’m glad I’ve finally done it.