Although I’m keen to read the rest of the Gormenghast trilogy, I’m conscious of this becoming too much of a Titus Blog. So I think it’s time to read a couple of other books before I return to Mervyn Peake. 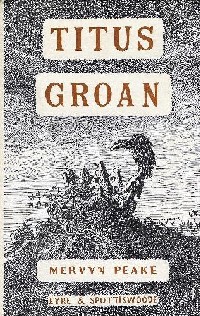 I highly recommend Titus Groan, however, even though the novel is a touch overlong at 500 pages. What works best in the book is Peake’s skill at conveying a sense of space, not only in the vastness of the castle but in each character’s own sense of perspective. In a memorable chapter, Steerpike stands on the castle roof and surveys all around him in great detail. He can see for miles around and takes time to digest as much as he can of his surroundings. And this is what makes Steerpike such a success; he can see exactly what’s going on, whereas most of the other characters in Titus Groan are blinkered, eccentric or, most chillingly, mad.

Other residents of Gormenghast can only struggle to see what’s happening or predict what is going to happen – Peake always conveys the dependence on natural light and the inevitable gloom and shadows that envelop the castle each day. In another memorable scene, the servant Flay spies, by chance, his enemy the drunken chef Swelter as he rehearses an act of murder. As he secretly peers through the gloomy half light he suddenly realises that the murder is his own.

But enough – I’m saving a full review until I’ve eventually read the whole series. Titus Groan was written in 1946, and Peake followed it in 1950 with the equally lengthy Gormenghast. The last book was published in 1959, the comparitively slim Titus Alone. I’ll hopefully be through them all quite quickly, to provide more half glimpsed visions of murder and madness.