Here’s a helping of the gothic, the fantastic and the downright scary. At the Mountains of Madness by H.P. Lovecraft is the story of a particularly disastrous expedition to Antarctica. One group of explorers meet a very gruesome end, whilst a second make some very disturbing discoveries. 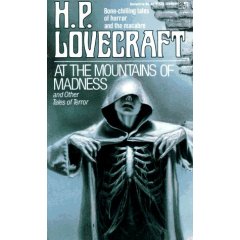 It certainly is an effectively chilling story. For me, the opening chapters work the best in how they hint at the horror in the frozen wasteland. Think of having to describe John Carpenter’s film The Thing, but not being allowed to go into gory detail, in fact only being allowed to vaguely suggest what has happened to the alien’s victims. Lovecraft cleverly hints at the impending fate of the explorers; their isolation, the nervousness of their dogs, the very vastness of the unwelcoming landscape:

In the whole spectacle there was a persistent, pervasive hint of stupendous secrecy and potential revelation. It was as if these stark, nightmare spires marked the pylons of a frightful gateway into forbidden spheres of dream, and complex gulfs of remote time, space and ultradimensionality. I could not help feeling that there were evil things – mountains of madness whose farther slopes looked out over some accurse ultimate abyss.

At the Mountains of Madness was rejected by the magazine Weird Tales when it was written in 1931. It’s difficult to see why, as weird it certainly is. But conventional, at least for the time, it isn’t. Whilst the opening chapters sit comfortably in the horror/science fiction genre, the later ones veer off into gothic territory when a second group of explorers unwisely decide to look further. Lovecraft paints a very detailed picture of a vast, ancient and seemingly abandoned city; his description is so vivid that I felt I was walking through its claustrophobic caverns. Creepy and disturbing, but not quick-fix horror.

If you haven’t been scared off by the cover art above, it’s from a 1991 edition of the book – described by Amazon as a mass market paperback. You couldn’t find more of a contrast with the cover of a different edition, below, which has more of a connection with the story, showing the foolish explorers travelling into Antarctica by air. 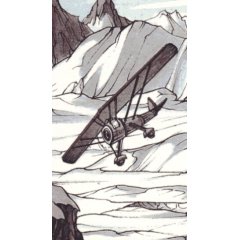 The first cover suggests the quick-fix horror, the second more a Boy’s Own adventure about to go wrong, or a 1930s update of an H. Rider Haggard adventure. A sort of King Solomon’s Mines where no one gets out alive – or sane.

I’m not too familiar with Lovecraft. I’ve read a few of his stories, but nothing has stayed with me. But it’s also been a while since I’ve read anything by him—about six or seven years, maybe—so I’ll have to look into this book.

Plus, I like stories about disastrous expeditions, so this one will definitely work for me, I think.