Following months of speculation, the BBC have remastered rediscovered episodes of Doctor Who and released them on iTunes to outsell even Breaking Bad. So a Halloween treat to celebrate…

The programme being 50 years old this year, it’s sometimes worth adding context to the various eras of Doctor Who. In December 1967 the television schedules included the premiere of The Beatles’ Magical Mystery Tour (who were also at number one with Hello Goodbye) and the first episode of the pre Python comedy Do Not Adjust Your Set. The Prisoner was about halfway through its run and Doctor Who was midway in its 1967/68 season. The Patrick Troughton era stories The Enemy of the World and The Web of Fear were aired between 23rd December 1967 and 9th March 1968. Now we can enjoy them again.

Obviously there’s a lot of sentiment around these releases. Patrick Troughton’s era has suffered the most, with a horrifying 53 episodes still missing after being wiped by the BBC with the only hope of survival lying in the hands of private collectors or foreign sales. So any find is worth a celebration. The Web of Fear in particular is a legendary Who adventure, featuring the Yeti and the first appearance of The Brigadier. The Enemy of the World is also a welcome find, even if it isn’t exactly such classic Doctor Who. There are no aliens, monsters, robots or any combinations of the above present, although it is enjoyable camp 60s stuff in The Avengers or Bond mould. It also lacks the usual Who cliffhangers that you might expect, and set in Australia in 2018, much of the budget for the season appears to be blown in the first few scenes with the inclusion of a helicopter and a futuristic hovercraft. Of course we must bear the production values of the day, although they are still way, way below The Prisoner and The Avengers which had the foresight of digging deep into the production pockets and shooting in colour. Still, this restoration does a fine job in polishing up the monochrome. 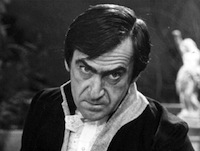 Key to The Enemy of the World is Patrick Troughton having a free pass to indulge in a spot of outrageous overacting. He’s cast as both the Doctor and his exact double, the evil Salamander. Yes, we’re in evil double territory. What starts as a possibly interesting idea begins to smart quite quickly, especially as Troughton’s wicked accent sounds too much like Papa Lazarou from The League of Gentleman, although much less sinister. Doctor Who explored evil doubles again a few years later when Nicholas Courtenay played an alternative Brigadier in Inferno, complete with an eye patch to help distinguish the good from the bad. It’s a plot device that tv never likes to ignore for too long, and around the same time Star Trek indulged in their own version of the evil double at least once. It’s something the viewer just has to endure from time to time.

Sadly, much of the plot of The Enemy of the World is nonsensical, involving poisonings, shootings, underground imprisoning and the Doctor hiding in a caravan. The episodes follow a pattern of people entering a scene and asking “where is Salamander?” The Doctor also muses once too often “well, I suppose I do look a bit like him”. And this version of 2018 is less futuristic than you might expect, and at one point a character is directed to the nearest public telephone box to make a call. To help things along, companions for both of these stories are Jamie and Victoria, played by Frazer Hines and Deborah Watling. As the longest serving companion, Jamie is synonymous with Troughton’s incarnation of The Doctor, where Victoria is less memorable, coming just before the more interesting Zoe who served to see out the rest of the Troughton era. Victoria is an interesting idea for a character, and plucked from 1867 she may originally served to provide a link to the late 60s Victoriana obsession, although ultimately she does little more than look confused and sound whiny. Other supporting actors include the evergreen Anglophile from the period Bill Kerr, and the great British character actor Milton Johns.

The Web of Fear makes better use of the strict budget of the day, and the London Underground settings are very convincing, creating an oppressive atmosphere where the Yeti can be frightening enough a presence by remaining often unseen as various members of the cast run into each other in grim and claustrophobic tunnels. As an over keen viewer, I tried perhaps too hard to spot tell tale glimpses of 60s London in the sets. There’s not much to see. The one identifiable poster on the Underground platforms is for a Rod Steiger and Sidney Poitier film, no doubt In the Heat of the Night although the title is Block-Busters. In the only exterior scene, the army lose a battle with advancing Yeti in deserted streets. Yes, 60s London!

It’s also interesting to note that both stories literally run into one another, with the nasty Salamander being sucked out of the Tardis at the end of The Enemy of the World, we pick up The Doctor, Jamie and Victoria desperately shutting the doors to escape the same fate at the beginning of The Web of Fear. Straight into the next adventure without a pause, although The Doctor finds a moment to make himself a sandwich. Episode three of The Web of Fear is still missing, but as an audio survives this accompanies a montage of images. For one episode it works rather well, in fact less grating than the animations used for the missing parts of 1968’s Cyberman London adventure The Invasion. 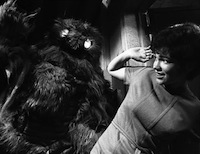 Nicholas Courtenay also makes his debut as Colonel Lethbridge-Stewart, later to be promoted to Brigadier when the whole UNIT concept took shape. The Web of Fear starts to form the blueprint for the Doctor Who format in the first part of the 70s, with the dominant military presence and Earth bound stories (Indeed, Troughton’s Doctor remarks knowingly to Jamie and Victoria that they have an increasing habit of landing the Tardis back on Earth). Lethbridge-Stewart is noticeably odd in his first appearance, a more ambiguous character than I remember him being; at first his fellow troops don’t know who he is, and he adds something of a mad-eyed stare and the most unusual of military hats. Perhaps the later promotion made him more relaxed and ironed out, but it’s interesting that he’s portrayed here as very much an outsider as the Doctor. Maybe this is what formed their bond.

Supporting actors include Jack Watling reprising his role from The Abominable Snowmen as Professor Travers, more than 30 years later for him but only several weeks for the time travellers. It’s a timey-wimey thing, although 60s Who wasn’t so dragged down with such trivialities. Tina Packer is quite good as Anne Travers, and a recent Companions magazine adds her to a small list of one-time assistants. Apart from the obvious title music, there’s little additional in the background apart from the eerie use of Music for strings, percussion and Celesta by Béla Bartók. If you recognise this it’s probably because it’s also featured in The Shining.

The Web of Fear was followed by Fury From the Deep in March 1968. Sadly, this story is still completely missing.