Somewhere in my record collection is a blue vinyl copy of Short Circuit: Live at the Electric Circus, a record featuring performances by The Fall, John Cooper Clarke, The Buzzcocks and Joy Division. This 1978 event is recreated in Anton Corbijn’s new film Control, with an amusing cameo from Clarke playing his younger self. It’s good to see him again; thirty years older but still on fine form. I didn’t spot any other such appearances and I was grateful; there were enough in-jokes in 24 Hour Party People, the other film telling the story of Ian Curtis and Joy Division and a film that was just a little too pleased with itself.

Control is a far more mature piece of cinema, based on the book Touching From a Distance by Deborah Curtis and filmed in stark black and white by Corbijn (who was responsible for many of the memorable monochrome stills of the band taken in the late 70s). Control tells the true story of four friends – Ian Curtis, Peter Hook, Bernard Sumner and Stephen Morris – who form a band after seeing the Sex Pistols perform in Manchester. The most enigmatic of the four was the now legendary Curtis, who spiralled into despair after being diagnosed with epilepsy. He committed suicide in 1980 aged 23 on the eve of Joy Division’s first US tour. 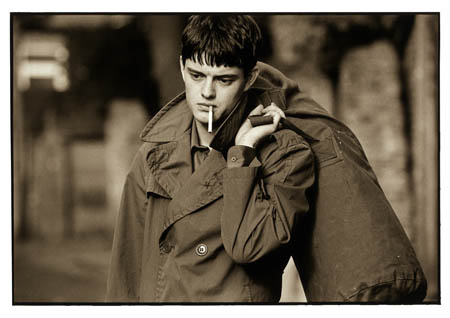 Control, attempts to unravel why such a young man – and one with such an unusual talent – chose to end it all on the brink of major success. The Joy Division story is a well documented one and I’m a huge fan of the music, and would cite them as one of the most influential bands of all time. You can hear the distinctive sound in new music today, and the established group The Killers cover a Joy Division song in the closing credits of Control. You can just tell they see this an the greatest of honours. But putting the lagacy of the music aside, the film still revealed for me a hidden side to Ian Curtis as it tries to piece together what went wrong.

I did know Curtis left a wife and young child behind when he died; I didn’t realise that they were barely out of school when they married. I also hadn’t really considered his ordinary working class Macclesfield background. The tower blocks of his youth and the cramped house he shared with his wife Deborah add to the sense of claustrophobia we see in him. There’s also the dual nature of his existence; the post punk icon writing lyrics at home in a break from decorating his living room, the enigmatic band leader returning home to face nappies and bottled baby milk. One scene shows him walking down a street in smart clothes and a tie at the height of the punk movement. The camera moves round to show the word hate daubed on his back. The scene ends with him entering the premises of his day job – the labour exchange. Such contradictions in his life can only have served to push him further into despair.

Sam Riley as Ian Curtis and the other actors playing the members of Joy Division radiate sheer energy in performance and are compelling to watch, although the film gives equal time to the singer’s home life. Domesticity takes a desperate turn when Deborah learns of his affair with a Belgian journalist. As, I suppose fittingly, Love Will Tear Us Apart plays in the background we see her rifling through her husband’s things. Boxes of Bowie and Lou Reed clippings, books full of lyrics and poems. She finds a name and number scribbled on an album cover. As their life begins to crumble, the life of Ian Curtis appears reduced to a few treasured possessions; the influences on his writings and music. In his final hours he plays a copy of Iggy Pop’s The Idiot. There is something about getting inside the mind of Curtis that preoccupies this film. We see his bedroom as a teenager covered in Bowie posters, there’s even a book of military uniforms by his bedside that hints at the band’s supposed flirtation with fascism (although the film doesn’t go on to explore or question this). Mostly, Curtis continues to remain a mystery. Deborah finds it hard to connect with him or his band; when she turns up at a gig heavily pregnant they, along with Factory boss Tony Wilson and the group’s mouthy manager Rob Gretton, are taken by complete surprise. Watching the band in performance she can only look on in wonder and she becomes the key figure in this film as we realise we can’t penetrate either the mind of this intensely introverted artist. Ironically, we see Joy Division in the studio recording the song Isolation- although I immediately thought of Deborah rather than Ian.

Control is a great movie thanks to the performances of Samantha Morton as Deborah and in particular Riley as Ian Curtis. His portrayal is stunning but it’s much more than just an impersonation. He can do the strange Curtis dance perfectly, he can do the facial mannerisms, but he also he brings across the sadness of an ordinary guy who’s life is torn in too many directions, and who faces life with an unbearable illness. Someone who wrote great lyrics but couldn’t appear to communicate with anyone directly. Despite this, Control isn’t depressing. It’s very sad, and what happened is indeed tragic but I always feel inspired when I hear the music of Joy Division, and this is the lasting feeling I’ve had from seeing this film. See it for the music, but also for the impressive photography and brilliant perfomances. And it’s not all doom and gloom, there’s also a lot of humour in the film. After all, they were all just ordinary lads.