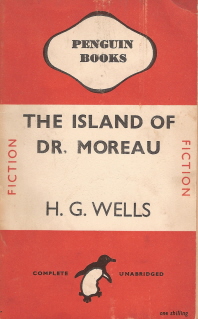 From my phase of collecting Penguin firsts, and I’m sure I also have a copy of The Time Machine somewhere. The white on orange stripe is still instantly recognisable, but does it tell us anything about the book? Admittedly, in my Penguin collecting I cared little for the authors in question and only wanted to fill the gaps in the numbers 1-200.

How many of those early Penguins titles do we recognise today? These are the first ten of their paperbacks published:

I can’t name all of the authors or all of the titles, and I must confess I’ve read none of them.

In the 1960s Penguin began to get a little more daring. It was the cover of this book that inspired me to want to read it aged 14. Although the 60s were long gone by then, I still found something adult, daring, even promiscuous in this cover. 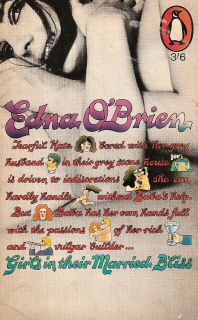 The colourful text is hard to read, but it’s selling the book with:

Tearful Kate bored with her grey husband in their grey stone house is driven to indescretions she can hardly handle without Dava’s help. But Dava has her own hands full with the passions of her rich and vulgar builder…