Made in 1978, The Ice House is the final entry in the original run of the BBC’s A Ghost Story for Christmas series. A contemporary set, non M.R. James story and minus the directing talent of Laurence Gordon-Clark, this is perhaps the most far removed film from the original intentions of the annual seasonal treat. But like the disturbing Stigma from the year before, The Ice House still deserves a nod of recognition.

Where Stigma is harrowing to watch, The Ice House is effective by being chillingly weird. It was written by John Bowen, who also penned the cult Play for Today Robin Redbreast in 1970. In The Ice House John Stride is Paul, a man who visits a health spa in the country. He’s a lonely character, dropping into conversation that his wife has recently left him. There’s a generally odd air about the spa created by the almost unsettling calm of everyone and Paul becomes fascinated by the lightly incestuous siblings who manage the hotel and the eerie brick “ice house” out in the grounds. A suggestively shaped hole in his bedroom window also helps to add to his gradual feeling of chill.

The Ice House reminds of several other, and ultimately better, entries in the series, for example the gently macabre tone of Lost Hearts. There’s also the James theme of middle aged gentleman searching for and being drawn towards something evil, although this time it isn’t really clear what the motives are. And like all of the Ghost Stories for Christmas films before it, this one doesn’t end well for the protagonist.

Christmas Day television ended transmission on BBC1 for Christmas Day Monday 25th December at 1135 pm with The Ice House. For an audience treated to an evening’s viewing of Mike Yarwood, True Grit: A Further Adventure with Warren Oates and Michael Parkinson talking to Arthur Askey it was probably a welcome relief. ITV offered an alternative with Ghost Story (1974) starring Larry Dann, whilst switching back to BBC2 at half past midnight offered the intriguing Late Night Story: Tom Baker reads The Emisary by Ray Bradbury. 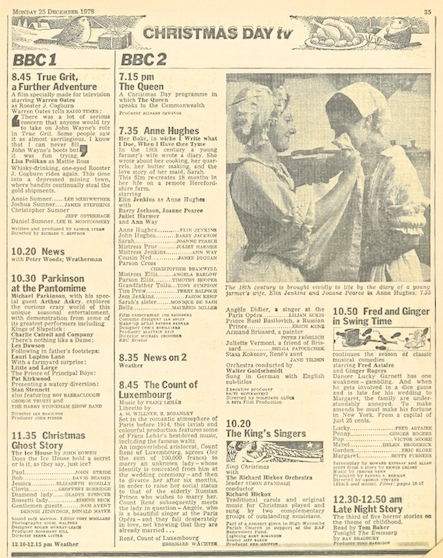 And as for Lawrence Gordon-Clark, he moved over to ITV to direct a 1979 version of Casting the Runes starring Iain Cuthbertson and Jan Francis. Clive Exton (who wrote Stigma) adapted the original James story. This one is well worth catching.