The Name of The Doctor was a blessed relief as a superb finale to an incredibly patchy 7th season. This episode posed more riddles than delivered answers, and was at times confusing. But there are now two things I know:

The Name of the Doctor is John Hurt 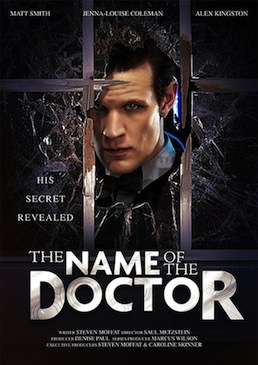 The news was leaked recently by The Sun that John Hurt would be playing a mystery incarnation of the Doctor in November’s 50th anniversary special. This Doctor would apparently fit somewhere between Paul McGann and Christopher Eccleston in chronology, a version of himself he’d denied existence of. For perhaps a horrible reason, and the closing moments of The Name of The Doctor appeared to suggest that Matt Smith’s Doctor was somewhat afeared of John Hurt’s Doctor.

In only a very brief appearance John Hurt was I thought marvellous. Unsurprisingly a commanding presence, and matched against Tennant and Smith in November the words “eagerly anticipated” are something of an understatement. But is this a true incarnation of the Time Lord, meaning that Matt Smith is actually the 12th Doctor, or is Hurt somehow an older version of McGann’s 9th Doctor? But then why do the photos from Hurt on set show him wearing a version of the leather jacket Eccleston costume? Let the speculation begin.

Casting an older actor again after so long is interesting, and perhaps as a taster for this William Hartnell was glimpsed fleetingly throughout The Name of the Doctor. And if Hurt’s Doctor is anything to do with The Time War, it’s perhaps deliberately complimentary to Derek Jacobi’s equally elderly version of The Master?

Season seven has been peppered with references to parents, daughters and granddaughters. Susan Foreman was referenced briefly in The Bells of Saint Joan. Clara’s past reveals that her mother died when she was young in The Rings of Akhatan. The Crimson Horror explored a particularly odd mother/daughter relationship. Probably others too that I’ve missed to add to the theme, but the clues appeared not to lead anywhere. Or to really be clues at all. And Susan Foreman is really only meaningful to either die hard or long term fans of Doctor Who. My own daughter was completely baffled by the opening scene of The Name of The Doctor, which jumps back to the pre 1963 Hartnell stealing the Tardis. Steven Moffat doesn’t let this dominate the story as it would alienate a large number of fans, but I think there is enough here to explain a core Who mystery. It’s a credit to Moffat that he’s obviously had this on his mind for some time, but keeps it secondary and subtle.

Why do I think this? In the opening scene, Clara confronts the Hartnell Doctor as he is about to steal the Tardis. He responds with a customary and typically gruff Hartnell “yes, what do you want?” Clara explains that he is about to make a terrible mistake. A couple of night watch Time Lords see two shady figures on a grainy Gallifreyan CCTV, the “found footage” of The Doctor’s very first adventure. Later in the episode, with copies of Clara now spread across space and time like confetti and a sort of understanding now spread of what’s going on with her, we see more of this encounter when she advises The Doctor to steal a different Tardis to the one he had in mind. The two of them, in my eyes, elope together on a whim. Clara really does “save” The Doctor.