I’m a madman with a box without a box. I’m stuck down the plughole at the end of the universe in a stupid old junkyard.

It’s likely that Neil Gaiman has always had it down as one of his ambitions to write a classic Doctor Who. It’s taken a long time, and The Doctor’s Wife was teasingly held back from last year’s season, but I’d say he’s achieved it. This was an outstanding episode that easily the best to date from season six. Maybe one of the best from any season.

What was so captivating about this episode was how Gaiman managed to effortlessly embrace elements of Time Lord lore to create a wholly original tale, albeit one that slips in rather well with the current story arc. Steven Moffat’s current disgruntlement with spoilers being leaked online makes me uncomfortable about sharing the plot too much. Even after the episode airing. All I’ll say is that Suranne Jones was an excellent addition to the cast with her fleeting appearance as the mysterious Idris, a Time Lord’s wife in perhaps a very original interpretation of the term. The Doctor’s Wife explored a theme so obvious that it’s ultimately surprising that it hasn’t been explored before: the relationship with The Doctor and his Tardis. Much of the dialogue and suggestion was sublime, in particular the theme of the Tardis stealing the Doctor to see the delights of the universe rather than it being the other way round. This was neatly set in the backdrop of a junk yard, harking back to the William Hartnell era and 1963. 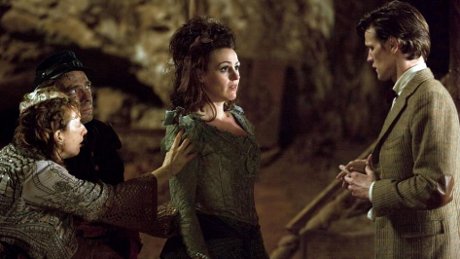 If I didn’t know that this was by Neil Gaiman would I have been able to guess? Possibly. The idea of the planet full of junk, with the patchwork inhabitants of Uncle, Auntie and the Ood nephew was in keeping with his oddity which often mixes humour with an underlying and more macabre agenda. The time boxes, remnants of lost and murdered Time Lords, were also products of one of the more imaginative Who fixated minds ever to be handed the keys to a story.

Was it really that good? Well, whilst the episode also offered a rarity in showing some of the Tardis interior, the seemingly endless corridors wandered by Amy and Rory brought to mind parts of Star Trek: The Next Generation. I’d heard that the fabled swimming pool was originally outlined for inclusion in this story but proved too expensive, which is a shame, although the dull passageways did add to the sense of horror in this part of the episode, the murderous graffiti echoing what we saw two weeks ago in Day of the Moon. Are we meant to make something of this, which leads to other patterns already emerging in this season. There’s already (although I haven’t really looked – I just feel it’s out there) much debate on the challenging themes from the first two episodes. The apparent demise of The Doctor, little girl and who she is/was and the pregnancy/non pregnancy. I’m not going to think about any of that just yet… and save it for the next post.

But a question. Has the “rest” of the Tardis been featured before? I recall a Sontaran being lost in the corridors many years ago? Did I dream this – or is he still there?

I really enjoyed this story too, although my favourite episodes of the season were (after the disappointing opening episodes) the ones featuring the brilliant Alex Kingston as River Song.

The rest of the Tardis interior featured in a Tom Baker story called The invasion of time back in the 1970s. It was quite a jarring element, though, as it was filmed on location in, I seem to remember, either a disused swimming pool or an old school. The (real) brick walls and edwardian-style glass-panelled doors we saw just weren’t convincing to me as a teenager…