There were times when I thought that the new series of Doctor Who would never kick in. Maybe you could call it Steven Moffat nerves, where it felt it was taking far too long to gain any faith in the new helm of the show. Then there was Matt Smith, likeable from the outset although I still wanted to move away from uncertain mutterings about him to the point where I was hanging on his every word. Now after watching the final episode The Big Bang I can relax in the knowledge that it was brilliant, glad that I didn’t post any unfavourable posts in the last thirteen weeks that I’d have to go back and rewrite (something in the Doctor Who world of complex timelines I probably would have been allowed to do). 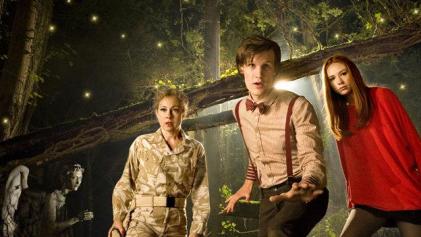 It probably wasn’t until the two parter The Time of Angels/Flesh and Stone that I began to relax with this season. The return of The Weeping Angels and Alex Kingston as River Song made Moffat’s epic tale deliver all that it promised. It wasn’t a return to Blink territory that many may have expected, although the writer had hinted that this was like “Aliens” following “Alien”. Taking the original premise and multiplying it several fold; Weeping Angel lore was gloriously played around with, most notably the legendary “don’t blink” being turned around into “don’t open your eyes”. There were many clever aspects to this. When Amy Pond first sees the Weeping Angels she instinctively doesn’t look away. There was also the notion of “the angel’s image becoming the angel”, and that we first see the Angels on a tv screen, which was a subtle reminder of the Doctor being on a screen himself throughout much of Blink. Perhaps I was over-analysing, but I’d say evidence that Mr Moffat had been really thinking about this one.

And of course River Song. The development of the River Song character is tantalising and intriguing. Is she The Doctor’s mother? Future wife? (“she’s far too old for him” bemoaned a friend until I reminded that The Doctor was hundreds of years old). Moffat is going to run with this character and her relationship with The Doctor, possibly to the point where our heads explode (I’ve already had to draw a graph, attempting to chart the sequence of their encounters). Presumably Alex Kingston is now fully committed to future seasons (or is that past seasons?) 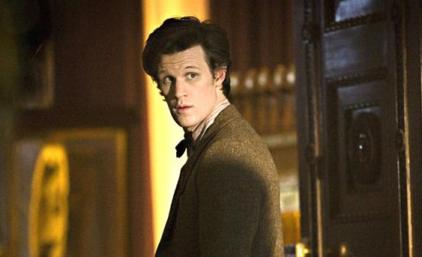 Other season highlights were The Lodger, where I realised I wasn’t quite sick of too much James Corden, and this episode drew out the very alien side of The Doctor, particularly in the hilarious scenes where he attempts to bed down to human normality. Vincent and The Doctor also worked for me, overcoming early reservations about Richard Curtis. Less appealing was Amy’s Choice (it was all a dream! And another dream!), Vampires in Venice (simply tedious) and the Silurian two-parter, although this one helped me to reassess Rory. After thinking of him as a Mickey Mark II (and therefore an unnecessary addition) his sudden demise was very moving, and set up his return in The Pandorica Opens rather cleverly. And even if you think that the idea of Rory as a Roman Centurion guarding Amy for two thousand years was a little too far fetched .. well .. where’s the romantic in you? The best by far was the concluding episodes, and Arthur Darvill as Rory exceeded all expectations. For The Doctor, Amy and the viewer.

What was surprising was how the series as a whole, appearing a little shaky at times, suddenly pulled together towards its end, making it clear that this was indeed a cleverly devised story arc. The opening scene of The Pandorica Opens linking Winston Churchill to Van Gogh was a masterstroke that set the pace where Doctor Who‘s timey wimey theme was pushed to the limit, most beautifully achieved in the scene where The Doctor scrolls back through past episodes, finding himself once again in the forest of Flesh and Stone. The fairy tale theme, set up skilfully in the opening episode, played out rather beautifully at the end, my favourite sequence being The Doctor carrying the sleeping child Amy up to her room. And Moffat thankfully steered away from the bombastic season finales of old, where perhaps his predecessor may have given in to a full scale Dalek/Cyberman/Sontaran freak out. The little things won us over.

So the answer is yes: I was hanging on Matt Smith’s every word by the time we got to The Big Bang. He really does suit the part, the odd thing being I’m not really sure why. Perhaps it’s the sheer potential of him; now that the future writers are lined up they can work with much more of a brief than wears a bow tie, talks quickly, floppy hair. Smith’s confidence also appeared to grow at a noticeable pace this series. Is he a better Doctor than David Tennant? Thinking about the previously penned Moffat episodes, Blink and Silence in the Library in particular, I think that he always wrote for his view of how the Doctor should be. There’s a scene in Silence in the Library where Donna and River are discussing him, The Doctor busy in the background; crouching down, peering into the darkness, adjusting his sonic screwdriver. Acting rationally in his own mind but receiving rolled eyes from others. That’s very much Matt Smith’s take on The Doctor.

But they should have let him keep the fez.