When Kim Newman recommends something I usually sit up and listen. The avuncular film critic and horror fan has recently released his Guide to the Flipside of British Cinema, a 40 minute documentary that accompanies the BFI’s series of obscure British movies now available on DVD. The films date from the 1960s and as a dedicated fan of forgotten cinema I have to confess that I’ve only ever seen two of them. Richard Lester’s The Bed Sitting Room (1969) is easily the best known of the collection, and even though I’ve never been a big fan of the film, Newman promises a fully restored print. Also there’s Privilege (1967), Peter Watkins study of pop stardom which followed his controversial television works Culloden and The War Game. 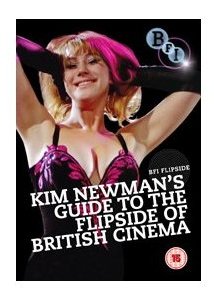 But it’s the films that have so far escaped my attention that interest me the most:

Newman’s DVD is nothing more than a taster for these films, so expect nothing more sophisticated than a series of clips and shots of him discussing them. Oddly, he doesn’t mention all of the films available in the Flipside series, missing out Guy Hamilton’s The Party’s Over featuring a young Oliver Reed. It’s on the top of my must-see list. Expect a review shortly.

Kim Newman’s Guide to the Flipside of British Cinema also features three short films. The Spy’s Wife, made in 1972, is a very odd film starring Tom Bell and Dorothy Tutin and directed by Gerry O’Hara. Perfect for spotting London locations but only just manages to stay its 28 minutes welcome. Tomorrow Night in London is a very short piece from the late 60s showcasing the happening scene of the time. It’s the sort of thing repeated on Channel 4 afternoon viewing until about 1990. Carousella is a black and white documentary about strip artists, which brings to mind elderly gentlemen in long raincoats at the Scala Cinema. However it is rather fascinating, and is well worth investigating – the mood reminding of Ken Loach’s Poor Cow.

Another great one is The London nobody knows. This is a melancholy trawl around some of the ruins and forgotten bits of London in the late 1960s with James Mason. Unfortunately this one isn’t available on DVD. As far as I know, the only place to see it is at one of the excellent BFI Mediatheques (http://www.bfi.org.uk/whatson/bfi_southbank/mediatheque) so, if you’re in London or one of the other three locations, have a look.

I remember it well as – for some bizarre reason – it often featured in Channel 4’s afternoon Christmas schedule in the 80s.

A cloth capped Mason, wandering around old music halls, lavatories and Salvation Army hostels. A bleak but fascinating view of the 60s. I’d love to see it again.