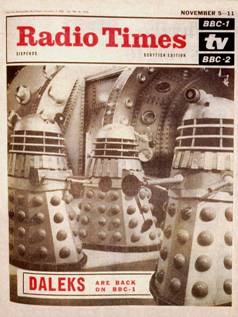 My plan to review every single episode of Doctor Who Season Five was dashed early by my disappointment with the second story The Beast Below. Rather than deliver a moany post about how the much anticipated Moffat has appeared to take up the reins of the worst of Russell T. Davies’ traits (the constant time loop of the human race, or specifically the English, on a spaceship again and again in the distant future), I’m moving swiftly on to episode 3, Victory of the Daleks.

Since their very first “return” when they invaded the London of the future in 1964 the Daleks have graced several Radio Times covers. Menacing The Doctor in black and white or colour, hiding behind The Ogrons or being ordered about by an increasingly tetchy Davros, they’ve remained more or less the same. Dav … I mean Terry Nation’s original blueprint had the stamp of genius. We know them, and we know what they’re after. Their means and the setting change slightly. And if it ain’t broke … well, we’ll come to that.

The latest Dalek return was penned by Mark Gatiss, a writer I’m particularly fond of since his League of Gentlemen days and more recently the wonderful Crooked House. Gatiss was responsible for Season One’s The Unquiet Dead which featured Simon Callow as Charles Dickens and The Idiot’s Lantern from Season Two. In Season Three he took an acting role in The Lazarus Experiment. Victory of the Daleks marks a promotion for him in being handed control of the Daleks or, as referred to in this episode, Bracewell’s Ironsides.

For me, Victory of the Daleks was where the jury returned to deliver its verdict on the new Doctor Who. Any good, m’lud? Well, the episode was noisy and bombastic, in particular with the excrutiating background music that accompanies every scene. There are no quiet moments in Season Five, and it is particularly irritating that the softly spoken Matt Smith is often drowned out. The 40s setting was novel, but perhaps not novel enough as memories of the superior The Empty Child , which introduced Captain Jack in his iconic Word War Two coat, are still fresh in the mind. Ian McNeice made an interesting, although unconvincing, Winston Churchill. Bill Paterson provided better support as Dr Bracewell.

As for continuing Dalek folklore, Gatiss dealt well with the increasingly awkward business of resurrecting our favourite nasties, who just won’t stay away. On a graph of Dalek resurrections, Victory of the Daleks was on par with the Davros episodes of 2008 but far below the Ninth Doctor’s encounters with them in 2005 and the 2006 Dalek vs Cybermen story that ended Season Three with Doomsday. Victory of the Daleks was very much Dalek lite, bringing them back to pave the way for future encounters. Although I must say the dashing of the just when you thought all the Daleks were gone comfort zone is becoming a bit of a cliché. 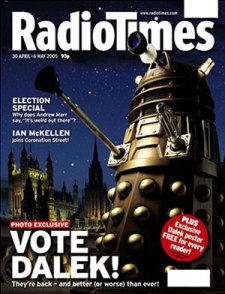 Worryingly however, the rather charming British Army Issue Daleks, garbed in khaki drills, were exterminated by their successors; a parade of brightly coloured and deeper voiced Daleks. It appears that Nation’s blueprint has been tinkered with, and this design option reminded of the Peter Cushing films of the mid 60s, where multi-coloured and almost gaudy Daleks were thought necessary to escape the monochrome studio-bound original episodes and offer bright and startling full colour Dalek-Orama. Or did I make that up…

Interesting to hear you liked the third episode better than the first two. I felt just the opposite – there were a lot of familiar themes in the first two episodes, but Steven Moffat is so much better at constructing plots than Russell T Davies that, I felt, they came off as much superior to the stories RTD has written in the past few years. Mr Moffat’s compassion (for the space whale etc) also seems more genuine to me. I agree completely about Ian McNeice (a good actor, but Churchill is just too familiar to be played by anyone but a “dead ringer”) and also feel that Steven Moffat needs to find a new composer.

I’d go a bit further and say get rid of the background music altogether. I’m finding it too oppressive.