Over the years some of the most memorable moments on television have involved the various regenerations in Doctor Who. My earliest experience of this phenomenon was when Jon Pertwee changed into Tom Baker, and I can remember feeling an immense void open up when I realised I would have to wait many months until the next series; only then could I find out what the new actor’s take on things was like. This feeling of momentous excitement never really went away, despite having to wait seven years before it happened again. And nobody can really argue that subsequent Doctors were particularly satisfying. But since 2005 viewers have been spoilt with top quality actors and nothing less than a regeneration-fest; Christopher Ecclestone being reborn as David Tennant, Tennant’s Doctor involved in a complex regeneration scene where he returned as himself, and now the lengthy business of introducing Matt Smith into the role. 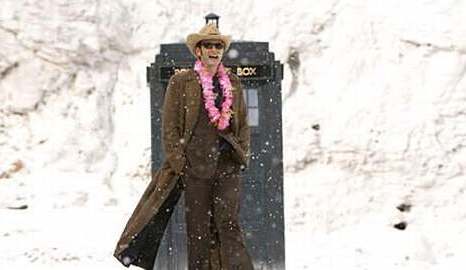 The Christmas two parter The End of the Time marked the departure of both David Tennant and Russell T. Davies. Cynics may say that the BBC overhyped the event, and even hardened Who fans might be forced to admit that they are absolutely sick of the sight of the ubiquitous Tennant. What worried me more was that Davies might sail dangerously close to the wind with this one, pulling out every available stop on his way out of the door. The opening of the first part didn’t bode well with the return of John Simm as The Master, and the resurrection scenes appeared muddled and involved the clumsy use of flashback and voiceover to explain what was happening. Simm is a good actor, but there’s something deep within me that isn’t convinced by his performance in Doctor Who. Hooded, madder and morphing into the occasional skeletal face, there was also a lost opportunity to explore the dying Master theme, something so memorable all of those years ago in The Deadly Assassin. But I shouldn’t really knock Simm. As I only have hazy memories of Roger Delgado in the role, for most of my formative years the part was played by the ridiculous Anthony Ainley, an actor only really suited to bad pantomime. So John Simm is likely to emerge as the definitive Master. I only wish that Davies had made more of him.

The Master aside, Davies had more success in exploring some of his other characters from Tennant’s tenure. Whilst Catherine Tate as Donna only made a few fleeting appearances, it was Bernard Cribbins as her grandfather Wilf who really stood out. The Doctor was allowed some quality time with Wilf, and the moment where two old men sat on an empty spaceship and looked out at the Earth in contemplation was sublime. With the luxury of an hour and a quarter running time for the second part, Davies allowed several such quiet moments. Sadly though, the outgoing writer didn’t have too much time for any new characters. Timothy Dalton showed up as kind of chief Time Lord, ultimately as equally batty as The Master but not a particularly memorable villain, and there was another missed opportunity in not attempting to flesh out any of the returning Time Lords (who included a mysterious woman played by Claire Bloom. Was this the Doctor’s mother? Fans will discuss this one until the end of time).

This being the Christmas story, there was a generous share of bombastic moments. The entire population of the human race turning into The Master. The Doctor jumping out of a speeding spececraft and hurtling through a glass roof. The sight of Gallifrey approaching the Earth like an oversized snooker ball. And of course the regeneration itself, so heated as to set the Tardis console room ablaze. Unlike the previous regenerations mentioned above, The End of Time took its time to make the switch from actor to actor. This may be Davies’ attempt to squeeze every last drop of acting brilliance out of Tennant and I’ll forgive him for this – he is certainly proved himself to be the best ever actor to play The Doctor. It was also a chance to explore what exactly regeneration means to a “dying” Doctor, and this is certainly something that hasn’t been explored before. One of the notable aspects of the 10th regeneration was that the Doctor – normally accompanied at these times by a companion – was alone. Instead we see him visiting all those dear to him, but always keeping a safe distance. The lonely Doctor, forever unreachable, mysterious and enigmatic…

The 10th Doctor’s final moments were inevitably self indulgent for Davies, but would nevertheless appeal to fans and didn’t slide too much into sentimentality. He visits Donna’s wedding to say goodbye to Wilf, eerily parking the Tardis just beyond the church graveyard. He saves both Sarah Jane’s son from a nasty accident and Martha Jones and Mickey from a Sontaran sniper (where they are and why they are together we will probably never know). The Doctor also visits a descendant from the woman who loved him in Human Nature and Captain Jack in a bizarre drinking den reminiscent of one of Han Solo’s dives in Star Wars. His only interaction with Jack is to give him the name Alonso thus initiating Jack’s friendship with a fellow traveller (a wonderful touch this as Alonso was played by Being Human’s Russell Tovey, the actor that Davies was touting as his 11th Doctor. So Jack gets his “perfect” Doctor after all – lovely). Finally, and fittingly, the 10th Doctor visits Rose. It’s January 1st 2005, so he therefore has his last meeting with her before they have met (time really is a timey wimey thing). She walks away from him about to embark on an adventure that will change her life forever.

David Tennant burst into action with the words “new teeth” in 2005. In 2009 the last thing he said was “I don’t want to go”. Matt Smith’s opening words were a whole mini narrative involving face, hair and other bodily parts as the Tardis hurtled towards the Earth. The Earth, you say? Yes, he does always appear to have some attraction to the blessed place…

And although The Doctor has changed an awful lot since 1974 I felt last night that I hadn’t changed at all. Still having to fill that huge void whilst waiting for the new series. And going only by the briefest of previews, it still looks rather spectacular. Bow-tied and pistol-touting, Smith looks particularly energetic (at one point bashing a Dalek with a hammer) and there are glimpses of the Weeping Angels and of River Song. I really can’t wait.

Personally, I’d like to see him return to that Totters’ Lane junkyard at some point. He’s been back a few times now (in the old series), it’d be interesting to see if it’s changed much since…

Did they revisit 1963 with Sylvester McCoy? I’d kind of lost interest by then.

Yeah, Sylvester McCoy, Ace, Daleks and Davros. I think it was ‘Remembrance of the Daleks’. Also featured the first flying dalek, I believe.

And Davros was just a head in a spinning box … or maybe that was just a nightmare I once had.