Even though you might be able to bend them a tiny bit, you can never change the laws of time. Even a passing Dalek could tell you that. This chilling premise was the idea behind The Waters of Mars, the latest Doctor Who special that edges the 10th Time Lord closer to his doom. Whilst I’ve found the previous two specials, The Next Doctor and Planet of the Dead, depressingly unmemorable this latest story is one of the best in recent years. There are themes that continue to stick in the mind and monsters that continue to scare the very young. David Tennant gives his best performance to date. 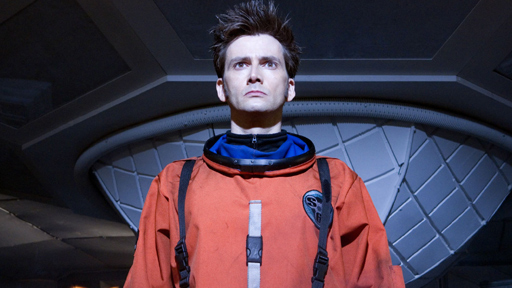 Thankfully The Waters of Mars provides a little more than just filler as a lead up to the Christmas episodes. After his lightweight guest turn in The Sarah Jane Adventures Tennant is stretched as an actor by writers Russell T.Davies and Phil Ford. Perhaps his run as Hamlet has helped, but never have we seen the Doctor veering so dangerously between the good and bad decisions we’ve so long trusted him to get right. What’s interesting about The Waters of Mars is that although the background tale of the doomed Earth colony in 2059 is pretty good by Who standards, it’s the finer details of the Doctor’s increasing loss of grip that is so compelling. On a better day, in a brighter universe, I’m sure that he’d have no trouble in sorting out this apparently low grade mess. But the laws of time have reared their dominant head, and the last of the Time Lords is looking like he’s had enough of them.

This story has been billed as the scariest ever Doctor Who, and judging by my daughter’s reaction to it I would go a long way to support that. The monsters aren’t that sophisticated; essentially humans turning into water dribbling zombies, but it’s often the simple things that disturb. And possibly this simple scare factor is there for a reason; many of the strands in The Waters of Mars are very adult. Arriving, as he tends to do, just as the nasty things are kicking off, The Doctor realises it is the day when the entire Mars colony (on the Bowie Marsbase – a nice touch) are wiped out. History tells that Adelaide Brooke (Lindsay Duncan) destroyed the colony in a nuclear detonation, presumably to save the Earth from the menace of the water monsters. This is told by each of the colonist’s obituaries flasing across the screen, telling us they all died on that day in 2059. And even though The Doctor has appeared in the nick of time there is nothing he can do. Some things are just set in time.

Brooke’s plight was beautifully played by Duncan and especially by Tennant, as he explains just why he cannot intervene. There’s a reference to The Fires of Pompeii and a fantastic scene showing Brooke as a small child, uncharacteristically spared by a Dalek in a sequence belonging to The Stolen Earth from the end of Season Four. And, like the end of Season Four, The Waters of Mars leaves the very best to the closing scene. Brooke and The Doctor’s final parting was unexpected, disturbing and quite moving. Never has the Doctor angered any one so much, and with such devastating results. And what’s best is that although The Doctor’s shocking behaviour in this episode was well documented, I did think he had redeemed himself somewhat towards the end. Only to have my hopes horribly dashed.

All in all, one of my favourite ever Doctor Who episodes, and the is way now expertly paved for the final two Tennant stories which begin on Christmas Day with The End of Time.