I’ve welcomed the return of Waking the Dead with open arms. It’s one of the best things on television in recent years. One of the many reasons to champion it is Trevor Eve, who continues to give a stunning performance in the lead role of Boyd, a fascinating, difficult and forever hard to read and unpredictable detective. 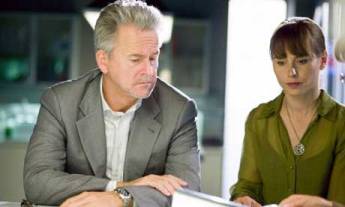 Boyd is, at times, quite a nasty piece of work, a likely reason why he’s so popular with viewers. He’s usually sullen and humourless, so miserable that he makes Inspector Morse look like Ken Dodd. Boyd is controlling and manipulative, often coming across as equally unlikeable as the villains he’s trying to catch. He gets what he wants, appearing at his most charming when there’s something clear in his sight (in an episode I shall call The Nasty Heart Surgeon he’s particularly friendly to a little girl, but only because her father is one of Boyd’s likely suspects). A viewer won’t go as far as shouting “boo, hiss!” at Boyd but is likely to say “you bastard!” at least once per episode.

Boyd has his demons, brought to the fore at the close of the last season with the death of his son. Consequently, he is a man who often appears on the brink. He doesn’t suffer fools gladly either. In fact he doesn’t take anyone at all gladly. And, this being a modern detective series, there’s no such thing as a softly, softly approach. When a suspect needs questioning they usually face Boyd full on, the rest of the team watching open mouthed behind a two way mirror, poised ready to pull him out if – and when – he goes too far. Grace (Sue Johnston) often steps in as the voice of reason when this happens (in The Nasty Heart Surgeon he leaves a female officer alone with a rape suspect, in the episode I shall call East European Illegal Organ Trading he deliberately sets off a sprinkler system in a bid to unnerve a suspect with a phobia about water). Grace is usually the best at calming things down (though she doesn’t actually say “calm down, calm down”, which might have been a neat touch considering her Brookside roots). Grace is the police psychologist. Boyd accepts her role but dismisses it where he can, viewing his own role as something more “concrete”.

your job’s all abstract … airy fairy … at least I get down to the nitty gritty.

The current series finds the team in a new headquarters, a dark and gloomy cavern where they look like leads in one of the sparser stagings of a Beckett play. In the opening episode Grace asks Boyd where her office is. He gestures to an unlit corner muttering “over there”. The most we can hope for in the way of lighting is a mean rationing of Ikea spotlights. The team unpick their cold cases, unsolved crimes from the past, by sticking post-its on a see-through wall. A very striking visual technique, something I’ve been trying to get for the office for ages. The almost gothic setting for the team HQ in Waking the Dead reminds me of the one in Torchwood, although this is possibly the only link between these two programmes you’re likely to see. Both though feature a team of experts who appear to operate just outside of the law (in The Very Nasty Heart Surgeon Boyd is investigated for breaking and entering). There’s also a very good share of strong female characters. Supporting members of the team also have a tendency to get killed off. No aliens of course, although the team leader does have a fondness for wearing long coats.

Waking the Dead does feature an inevitable quota of clichéd acting, here giving a generous amount of time to computer acting. Our team appear unaware of mouse functionality, and use all of their computer applications by furiously tapping away at the keyboard. At least everything is nicely keyboard accessible. Eve (played by Tara Fitzgerald) is particularly good on the computer. In the episode I shall call It Had to be Twins she constructs an entire 3D simulation of a house interior and peppers it with visual representations of DNA samples found at the crime scene. All by keyboard. Eve’s genius at forensics (Boyd often shows his silent exasperation at her thoroughness) is balanced by Spencer (Wil Johnson), who appears ostensibly as some no-nonsense muscle but is a man often deeply affected by things. Spencer is dropping hints that he wants to leave the team. With only two more episodes to go, I can’t help thinking that there might be something horrible in store for him.

The stories in Waking the Dead are at times preposterous and convoluted, although I always find them fascinating and always gripping. This is helped by the excellent performances. In It Had to be Twins, the lamest of plot devices (“ah, they were twins all along”) unfolded as a believable mystery stretching back to 1967 and featuring two interweaving stories that I found connected rather cleverly. “East European illegal organ trading” was particularly darkly themed, where the series was allowed to become its most Silence of the Lambs ish. For good measure, I also found a similarity with 28 Days Later where Spencer has a most disturbing encounter. Boyd was again allowed to be his horrible self, and became particularly agitated by Eve’s romantic involvement with a murder suspect. Cue one of the best “you bastard!” moments and Boyd at his most controlling.

At times, but only very rarely, does Waking the Dead give in to lazy plotting, such as Boyd’s ease of tracking down a rapist through a “relative’s” DNA in The Very Nasty Heart Surgeon. In the same story, one suspect hides evidence as a security measure against another; the second suspect finding this evidence all too easily. All in all, however, this is superiorly cerebral stuff and shows how far tv has come, with an irony being the presence of Trevor Eve. We can remember him fondly from Shoestring when he played the most amiable of detectives, and the antithesis of Boyd. But Shoestring was 30 years ago, and a world as quaint perhaps as Dixon o’ Dock Green. Perhaps Waking the Dead doesn’t really portray the world we live in today, only the tv version of it, but authentic or not I can still enjoy it just as much as Torchwood.