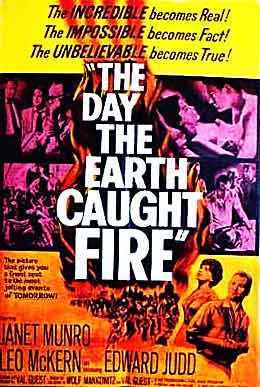 Despite this being an at times laughably low budget film, The Day the Earth Caught Fire deals with a subject that’s still a topic today. Global warming, drought, heatwaves and especially flooding. More than thirty years before The Environment Agency! But being 1961 the biggest issue here is the nuclear rather than the environmental one, and the film deals with the aftermath of secret nuclear tests that result in the tilt in the Earth’s axis being altered slightly. Slight, but enough to cause heatwave, cyclones and flooding. Especially in London.

Most of the film centres around Fleet Street, with McKern and Judd playing two seasoned journalists who try to make sense of it all as the heat cranks up. They open windows, put on fans and loosen their ties. They head for the local pub but it has run out of ice cold lager (although by all accounts warm beer was the usual thing in those days anyway). Along comes Janet Munro as a sort of Judd love interest, the girl from the ministry who reveals what’s been going on behind closed nuclear bunkers. It’s a scoop that sends the world reeling again.

The supporting actors include Bernard Braden, Peter Butterworth, Reginal Beckwith (from Night of the Demon) and John Barron (best known as CJ in The Fall and Rise Reginald Perrin). There’s also a walk on from a pre-fame Michael Caine, who plays a helpful policeman. The most bizarre casting in the film, an experiment that almost pays off, is Arthur Christiansen. Here the real life editor of the Daily Express plays the onscreen editor of the Daily Express. It’s a brave move for authenticity, and Christiansen tries his best, although he just doesn’t hack it as an actor. All he can do is memorise his lines accurately, which he manages admirably. But when he’s up against Leo McKern (whose axis is tilted in the direction of ham acting), he doesn’t stand a chance.

Although Leo McKern and Janet Munro are given top billing, the real star of The Day the Earth Caught Fire is Edward Judd. For a short period in the 60s Judd was the great hope of British science fiction cinema. He also appeared with Lionel Jeffries in H.G. Wells’ First Men in the Moon (1964) and the now rarely seen film from Merton Park Studios Invasion (1965). Sadly, his career quickly petered out, although his other key films from the sixties are Island of Terror (1966) with Peter Cushing and one of the She franchise, The Vengeance of She (1968). After that he was relegated to supporting roles in the likes of The Sweeney and The Professionals and is possibly best known for the Think Bike! public information films from the mid 70s. Sadder still, Judd died in February of this year, and there were several internet rumours (although unfounded) that he’d ended up living homeless in South London.

Although usually always given corny scripts, Judd was a very decent actor – especially so here. He plays the disillusioned and semi-alcoholic journalist extremely well, and I think he effortlessly outshines McKern, who is over mannered in this film. I’m not sure about Janet Munro either; she isn’t given much in the way of inspired dialogue, but is featured in one or two semi-clothed scenes that the 1961 critics probably thought “steamy”, although the bed sheets are always strategically arranged.

As stated, much of the film is low budget, with the “disaster” footage suspiciously looking like it’s culled from newsreels, although the more memorable and effective scenes are the simplest. The newspaper men crowded around the sweaty office, the distant loudspeaker broadcasts from the sober Prime Minister (sounding very much like Harold Macmillan), and Judd pushing through jazzy end-of-the-world street parties to get back to Munro’s flat. Best of all though is the opening and closing scenes of the film that are filmed in sepia, where Judd claws back his credibility as a journalist in the now deserted capital.

Another key scene of The Day the Earth Caught Fire comes at the very end, where the Daily Express printroom boys are poised with two alternate front pages of the next edition. One reads World Saved, the other World Doomed. A further set of risky nuclear detonations are scheduled in a bid to set the Earth back on its course, but the film ends vaguely and we’re left without an answer. In the days when the nuclear threat was a very real one, it looks like the audience were deliberately left with an air of uncertainty.