The Next Doctor was the fourth Doctor Who Christmas special to star David Tennant. It was also the most restrained, and left me feeling less over indulged than other years. Whilst previously alien ships over London, giant spider women and a space Titanic featuring Kylie Minogue had me feeling as much bloated on tv sci-fi as I was on Christmas pudding, The Next Doctor at least allowed some breathing space. 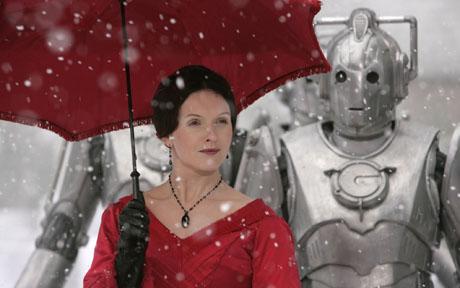 This year’s special received so much attention that you’ve probably been lost in the void (where Daleks and Cybermen are banished, although they have a horrible habit of escaping) if you’ve missed all of the hype and build up. A preview on Children in Need in November was followed by much speculation as to David Morrissey’s role in the grand scheme of things. Was he really taking over from Tennant?

I’m not giving anything away just in case you haven’t seen The Next Doctor yet. The clue, however, is in the widely available opening scene. As the two Doctors stand poised both with sonic screwdrivers in hand, have a closer look at what the Morrissey Doctor is actually holding… Russell T.Davies also manages to weave in some Who mythology and dash the hopes of the expectant fan. There’s a nice twist on the pocket watch theme from series three, and in one scene we get to see glimpses of all ten Doctors. Whether or not Morrissey is really a Time Lord, he’s still very good – and the Tennant Doctor gets a ride in the rather magnificent other Tardis.

As usual, I receive new Doctor Who adventures with mixtures of excitement and disappointment. Russell T. Davies writes the Two Doctors story very wonderfully, although he fails to deliver in the second half of the adventure when the large and loud sci-fi takes over. And I’m not sure if Davies, like all of his predecessors, really knows what to do with the Cybermen. And the 1850s setting does little more than make it appear seasonal. Although it’s buried somewhat, there is some comment on woman’s role in Victorian society; Morrissey states loudly to his companion that she should remain solely in a Seen and not heard role, and Dirvla Kirwan makes an excellent villain with a timely agenda. The graveyard scene with her dressed in red is memorable and effective. Scarlet clad evil ladies and Cybermen stomping through the snow go together rather well.

The recent Doctor Who at the Proms easily highlighted what the modern Who does successfully. Tugs on the emotional strings with music that tells you just when to stifle that tear (Tennant’s face of a thousand expressions helps with this), and over familiar monsters to scare the kids. I’m happy to go along with this, although I still wait impatiently for Steven Moffat to step into Davies’ shoes and take the show somewhere new and original. And reports say that we really do find out the identity of the next Doctor on January 3rd…

What do you think of the new doctor? Not sure about it myself but still it shows some bravery from the casting department.

I quite like the look of him. I’m glad that they’ve picked somebody unknown, especially with some of the more established names that were touted. For example James Nesbitt. It will be good to approach a new Doctor with absolutely no preconceptions.