After recently watching Bedazzled on late night tv I decided to seek out the spy thriller A Dandy in Aspic, which features Peter Cook in a cameo role. This 1968 film is set in London and Berlin and stars Laurence Harvey, Mia Farrow and Tom Courtenay. It’s filmed beautifully; London is damp and autumnal whilst Berlin is by contrast sunny and light, but while the cinematography is excellent the direction does owe a debt to The Ipcress File which came a few years before. There’s even a John Barry-eque haunting theme tune (actually by Quincy Jones), so while A Dandy in Aspic is a worthy addition to the cold war film canon, it does little more than tag along to the already set templates of the genre. 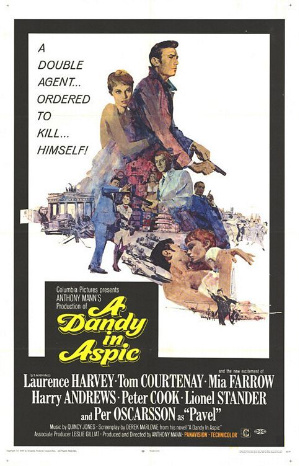 Harvey, one of the oddest leading men in film history, is quite wooden in this film. Farrow doesn’t shine particularly either, so it’s really up to the supporting cast to jolly things along. Whilst Courtenay seems misplaced in this movie, there’s excellent turns from Harry Andrews, Geoffrey Bayldon, John Bird (from tv’s Bremner, Bird and Fortune) and Mike Pratt (Randall in Randall and Hopkirk, Deceased). Also worth mentioning is Norman Bird, the supporting actor who appeared in countless British films in the sixties. Any casual student of this period in cinema will probably say oh, him again, whilst the posher critic might even say ah, the ubiquitous Norman Bird. But I always feel in safe hands when I spot Norman Bird. Then of course there’s Peter Cook, and although he only really has a tiny role he’s very good in it and it’s odd to see him in a rare serious acting role.

The cold war spy plot of A Dandy in Aspic is as complex and convoluted as the similarly themed Funeral in Berlin or The Spy Who Came in From the Cold. It’s been unjustly forgotten though, and it’s genuinely thrilling, although a touch deliberately confusing. Harvey plays a Russian double agent, coerced into travelling from London to East Berlin in order to carry out an assassination. There’s bluffs and double bluffs, and any attempt to further flesh out the storyline becomes bogged down with too many or is he? s and but did he? s. There’s also an interesting parallel with The Prisoner, where the but is he? s and an and does he? s also come into play.

The film’s director Anthony Mann died in Berlin in 1967 before filming was completed. Harvey picked up the pieces and finished A Dandy in Aspic, and while you can’t really see the joins this serious hiccup to production is obviously why this is an often erratic and bewildering film. For a decent spy thriller, your time is better spent with Michael Caine as Harry Palmer, and if it’s a mysterious, cerebral and absorbing sixties film then try The Quiller Memorandum. Now there’s a really good John Barry soundtrack. But A Dandy in Apsic is worth seeking out, especially for Peter Cook and Norman Bird completists like me.