In 1967, Peter Cook and Dudley Moore were the BBC’s shining comedy stars. It’s difficult to judge now just how popular they were thanks to the Beeb’s crazy decision to wipe the tapes of most of their Not Only, But Also series. As a team, Cook and Moore’s achievements are now best marked by the few sketches that do remain from the black and white shows and from the cult Derek and Clive recording that came much later. Peter Cook is now probably best remembered for, well, simply being Peter Cook – amusing and often tipsy on numerous chat shows. But 1967 was also the year of their finest achievement. The brilliant comedy film Bedazzled. 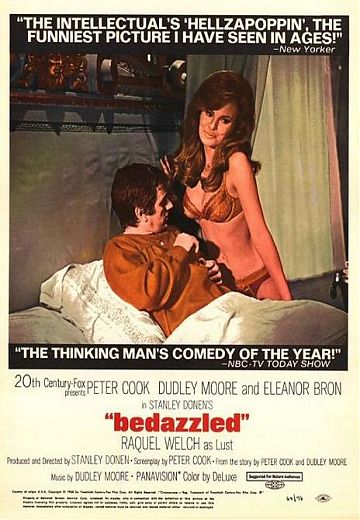 Typically for a 60s upgrade from television to film, Bedazzled is colourful, expensive and made to last. Perhaps Cook and Moore were aware that their television exploits were soon to be binned (rumour has it that Peter Cook wrote begging letters to BBC chiefs in the early 70s to save his old shows from the skips lined along Wood Lane), and wanted some cash thrown at their talent. But unlike many comedy films adapted from tv in the 60s, and especially 70s, Bedazzled is far above average. This is possibly because, different to the situation comedy, Cook and Moore’s humour was sketch based. But unlike Monty Python’s lazy And Now For Something Completely Different, which simply refilmed a series of television sketches for the big screen, Bedazzled creates an interesting and inventive frame for the sometimes unrestrained humour.

Moore plays Stanley Moon, a hapless cook in a Wimpy bar, besotted by a waitress (played by Eleanor Bron). He meets a George Spiggott (aka The Devil – Peter Cook), who grants him a series of wishes in order to allow Stanley to win his girl. This is the framing device, and Cook (who wrote the screenplay) creates a way to easily weave together what is essentially a series of short sketches. Some of them don’t work so well, although the ones that do are hilarious (Moore as a raspberry blowing trampolining nun is the funniest thing they ever did together). It’s all far from the satire often associated with Cook’s humour, although when he does attempt it – such as the spoof of 60s bands – it’s brilliantly spot on.

Bedazzled sometimes comes across as a film that’s been engineered to look like it belongs in the swinging 60s. There are the glimpses of routemaster buses and red post boxes, and what always fascinates me about films made in London in this period is the locations. Bedazzled depicts London as half building site half modern office block (the Post Office Tower features heavily in one scene). And oddly, like most of the location shooting from tv’s The Avengers, the streets are empty and devoid of extras and traffic. London is depicted as eerily empty and hassle free. In one scene Cook and Moore pretend to be traffic wardens, although the pre-congestion charge London of 1967 looks like a city where parking is never a problem.

It’s worth seeing Bedazzled for a record of Cook and Moore at their peak, before the respective boozing and lure of Hollywood got in the way. Raquel Welsh also makes a cameo appearance, as does Barry Humphries, and Moore wrote the theme music. Possibly it’s tongue-in-cheek music, but it’s as good as anything from similar films of the period. Just watch out for the migraine-inducing effects that accompany the opening titles. Incidentally, it’s directed by Stanley Donen who’s probably best known for Singin’ in the Rain.

Peter Cook and Dudley Moore went on to appear together in the films Monte Carlo or Bust and The Bed Sitting Room, both made in 1969, although these were more ensemble pieces. The first a caper movie, the second more of a Spike Milligan vehicle. In 1978 they got back together for the coarser-humoured Hound of the Baskervilles. As a solo performer, Cook appeared in several films including the spy thriller A Dandy in Aspic (1968) and The Rise and Rise of Michael Rimmer (1970) which he co-scripted with John Cleese. But he was never much of a varied actor, and Moore was left to pursue a much more successful, if ultimately irritating, film career. Bedazzled is by far the best thing both of them were involved in on the big screen. The script is very well written and it’s a witty and, most of all, a very charming film. And a reminder that they were a very charming and likeable double act.

so you watched it on telly this week too, then?

Bedazzled is good, but one of Peter Cook’s later shows – the four-parter on Clive Anderson, where he interviewed four different Cook characters was excellent … and is on youtube: http://uk.youtube.com/watch?v=oeG9r6HxJgE

Yes I’ve seen that and it is very good. I’m still more drawn towards the Pete ‘n’ Dud stuff though, perhaps I just have a romantic view of that era.

another great thing to check out for Peter Cook (and to my mind the best thing he ever did) is his radio collaboration with Chris Morris called ‘Why Bother’. Its also on youtube

Now this is one thing that I haven’t seen yet. Will check it out. Ta.