Also known variously as Histoires Extraordinaires, Spirits of the Dead, Tales of Mystery, Tales of Mystery and Imagination and – sigh – Tre passi nel delirio, this extraordinary film is the result of what happened when they asked three leading European directors to collaborate on the short stories of Edgar Allan Poe. Roger Vadim, Louis Malle and Federico Fellini each contributed a tale to this 1968 gem. It’s difficult to decide which of the three segments is the most confusing, infuriating and visually stunning. They are all in turn weird and complex, and feature a top notch cast including Jane and Peter Fonda, Alain Delon, Brigitte Bardot and Terence Stamp. 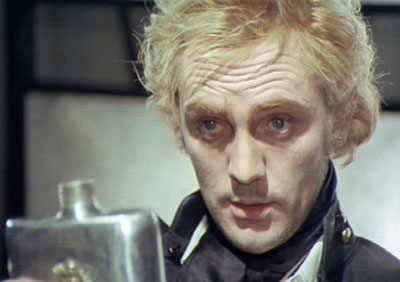 Thinking of Poe adaptations, Roger Corman’s series of films from the early 1960s featuring Vincent Price always springs to mind. This film is nothing like that, and the adaptations – especially the Fellini one – are painted with very broad brushstrokes. It’s also very much a film of its time, and its cast – especially Fonda and Stamp – icons of that era. Roger Vadim and Jane Fonda appear to be gently warming up for Barbarella and their section Metzengerstein, that opens proceedings, doesn’t really amount to much. It’s visually very impressive, with an medieval and semi-erotic theme to it (what more do you need?) but the story is too vague and open-ended. Jane Fonda plays a woman who appears rude and cruel to all who she encounters, until her cousin saves her from an animal trap in the forest. He’s later killed saving a horse from a fire, and following this both a strange tapestry and a beautiful black horse appears. There’s a jolt of a scene when we finally get to see the completed tapestry, although other than that it lets down somewhat.

Things pick up with the second section, William Wilson, which stars Alain Delon as a man haunted by his namesake, the other William Wilson who trails him throughout his life. It begins with a fantastic scene of Delon running towards a church, desperate to confess his sins. We learn of his childhood and life as a medical student, and there is an extraordinary and terrifying scene involving an attempted live dissection. Ouch! Unfortunately it then sags in the middle. Brigitte Bardot appears wearing an absurb black wig and the two become involved in a long and convoluted card game, Delon’s wooden acting not helping very much. William Wilson ends rather predictably, but Louis Malle’s direction keeps it interesting and he injects equal proportions of charm and menace.

The third section, Toby Dammit, is the best and this is where things really do take a weird turn. In Fellini’s piece, Terence Stamp plays a boozy and bored looking British actor who is lured to Italy on the promise of a Ferrari to make a Western. This is very much a perfect role for Stamp, with his unruly hair dyed blond I freely have to admit that he was a very handsome young man indeed, despite the fact that he also looks completely washed out and wasted in this movie. He also plays on a childlike charm he used very effectively in Billy Budd and again much later in The Hit. Here, dubbed into Italian, he resorts to odd movements and mannerisms. Perhaps he was unfamiliar with the language, although this would be sometimes incomprehensible in any tongue. At times he’s almost clown like, at others robotic, and if the boredom and indifference he conveys is any comment on his own – sometimes charmed – life at the time then it certainly had an affect on his future. Like his contemporary James Fox (who took his role in Performance a little too far), Stamp also baled out of acting for a few years at the end of the 60s. And seeing Toby Dammit makes me think making this film might have contributed to causing his lost years.

Toby Dammit is odd like you’d expect Fellini to be. Odder in fact, although it does get bogged down with its hero driving his Ferrari like a madman and screaming. Only when, like the preceding tales, it moves into proper Poe territory does it really grip and Stamp’s eventual nemesis in the shape of a small and seemingly innocent child really sent a chiver down my spine. But what it’s all really about – well, you really need to see this for yourself. It didn’t help that I watched the whole of this in fifteen chunks on YouTube and it’s possible I may have got a couple of the Stamp segments the wrong way round, although I’d imagine Fellini would be amused by this. All three of the tales are linked, albeit casually, and explore three not particularly likeable individuals and how they bring about their own ends. Weird, yet certainly mysterious. And definitely extraordinary.

I’d love to see this, especially the “Toby Dammit” segment (because I often drive my Firebird very fast while screaming—it’s therapeutic, you know) and what can beat Brigitte Bardot in a ghastly black wig?

My Dad, who must be very demented indeed, used to bring home old 8mm copies of Price’s “The House of Usher” and “The Pit & the Pendulum” and screen them on our living room wall when I was a tiny little kid. I had nighmares, but eventually developed a thick skin about all things horror.

Oh, and was there anyone better at the “B” horror genre than Vincent Price? I loved him. Do you remember “The Fly?”

P.S. “The Conqueror Worm” was “The Witchfinder General” in Britain.

I forgot to post the link to watch this online so here it is. Special thanks to 21458922, whoever you may be.

Funnily enough, my Dad was a Vincent Price fan. Maybe he appealed to that generation? I remember being subjected to The Fly at an early age. But more often than not I’d be simply told about films because they were shown way past my bedtime. Two Ray Milland films stand out: The Man With X-Ray Eyes and The Premature Burial (another Corman Poe).