Christopher Petit’s Radio On was made in 1979 and has achieved status as a cult, and extremely obscure, British road movie. Filmed in black and white and featuring a soundtrack including David Bowie and Kraftwerk, it’s a moody and experimental piece that offers a fascinating snapshot of England at the end of that troubled decade. 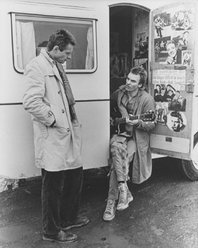 Radio On has escaped my clutches until now, so thanks to the BFI for finally releasing it on DVD. I’ve been interested in catching up with this film for what seems like an eternity; for its acclaimed soundtrack and the use of the twin locations of London and Bristol, my two home towns. The film is probably most well known for featuring Sting in an early acting role, although don’t let that put you off – his performance is far superior to the one in his other 1979 film, Quadrophenia.

Hearing of his brother’s death, a man called Robert (David Beames) embarks on a journey from London to Bristol in his unreliable Rover, encountering several odd characters on his way. A disturbed army deserter (who he wisely ditches by the roadside), a petrol pump attendant (Sting) living in his caravan shrine to Eddie Cochran (who, by no coincidence, died in a motorbike accident on the A4 where Radio On is mostly set), and a mysterious German woman looking for her daughter. Throughout the film Robert appears unable to communicate with others, left in his own thoughts he descends into a drunken spree that leaves him – literally – on the edge.

The snow covered landscape of the South West roads with their seedy filling stations and grimy cafés appears very far removed from the pristine Marks and Spencer Motos of today. Petit’s world is almost an alien one, both from the almost bygone era it represents and for the fact that it is so unlike any other British film of the period. The monochrome shots of the Westway tower blocks look distant and almost East European, and the director does like to dwell on this. There’s also the Kraftwerk tracks and Bowie screaming Heroes in German, and the suggestion that the brother has died as a result of involvement with a European porn ring. But this is no Get Carter. Robert isn’t out for revenge, he isn’t sure what he’s out for at all and the film asks more than it answers. In this way it’s extremely demanding, and what at first appears inconsequential turns out to be a deeply thought provoking look at people stranded in a tired and wasted landscape. As a period piece that looks at Britain on the edge of Thatcherism it’s as good as, if not better, than Stephen Frears’ Bloody Kids.

Yes, there’s an undeniable strange taste to much of Radio On, but it really is a work of art; and the soundtrack is so memorable because it sits so oddly with the film’s content. During the opening scene a camera roams nervously round an empty flat to the accompaniment of Bowie’s Heroes, eventually settling on an apparently dead body in a bath. Workers on a factory shop floor listen to Ian Dury’s Sweet Gene Vincent in a scene that out-weirds David Lynch. Robert lurches drunkenly in a bar to the background of Lucky Number by Lene Lovich and there’s a stunning driving scene to my favourite Bowie song, Always Crashing in the Same Car. Not everyone admires the strange beauty of the Westway or the M4, but you’ll certainly see it in this film. It’s beautifully shot and very, very strange – but well worth a look.