Last Saturday marked the passing of Doctor Who Series Four. This was possibly my favourite series so far, with the excellent Catherine Tate proving all of my original doubts about her wrong. Doctor Who fans speak these days of story arcs, and the Doctor-Donna story of 2008, including in no particular order the return of Rose, the emergence of the Doctor’s daughter, the inevitable resurrection of the Daleks and a supporting turn from the brilliant Bernard Cribbins, had me hooked. 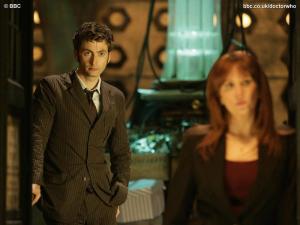 Our house was packed with Who fans young and old last weekend and the final episode left us exhausted. Adults and children sat around the table confused and dumbstruck, raising their heads to start talking only to sink back into inner thoughts. It was just too much to absorb. Two Doctors (or was it three?), practically everyone the Doctor has ever befriended in the last four years (Captain Jack, Donna, Rose, Martha and even Sarah Jane who he’s known since the early 70s), Davros at his most insane (and at last played by a decent actor – Julian Bleach) and a final wrapping up of the Bad Wolf ending from two years ago. Just too much for my simple mind – for a moment I needed a nearby Time Lord to come along and wipe my memory clean to stop my head exploding…

But what – I think – we learn from it is several things.

That head writer Russel T. Davies will pull all the stops out on an ordinary day, but pull a muscle when it comes to end of season.

That we’ll face a familiar foe in episodes 12 and 13. Last year the Master, this year the creator of the Daleks.

That the Doctor will always, always end up on his own. So what better way to highlight this than to surround him with all his friends and then pluck them all away, one by one. I’ve noticed that, when he’s on his own, the Tardis looks huge with just him standing there in the control room. And the camera likes to dwell on that.

That we’ll want to buy the DVD of the series when it comes out, to check and recheck all of the clues. The references to “The Medusa Cascade” and “the Doctor-Donna” (not to mention “your Song will end soon” – I got that one). The Rose sightings. The whispering in ears. The name (or lack of) theme. The hand. The timey wimey stuff.

So tonight I sat down with my daughter and we watched the BBC Three repeat. The episode was still confusing, but it was the last fifteen minutes or so that got me. Brilliantly written and acted and just painfully sad. The Bad Wolf business was superbly done, but what was just sensational was the conclusion to the Donna Noble story. I just found it very moving that once the Doctor had introduced Rose to the earlier angry, immature, dangerous version of himself ready for taming he suddenly faces the earlier, less travelled, less enlightened Donna. And there’s nothing he can do about it. So while Rose gets a rougher version of her man, the Doctor nods goodbye to the original incarnation of his best pal. And the sight of the scared Donna pleading “don’t let me go back there!” as he approaches her to wipe that dangerous memory was, for just a tv show, heartbreaking. And the final Cribbins/Tennant scene was an absolute joy.

Of course, if you’ve not seen it yet this post is meaningless to you. Don’t take what I’ve said as spoilers, just enhancements to the story arc. All I really wanted to say was well done Russell T. Davies for having a nine year old and a man fast approaching middle age in tears at the same time. I never thought I’d see the day.