Okay, so we were all warned about the second series of Heroes. Even Tim Kring, the series creator, famously apologised for its lack of vitality. But I was willing to cast doubt aside. The first series was so good that the second couldn’t possibly be that bad. Could it? 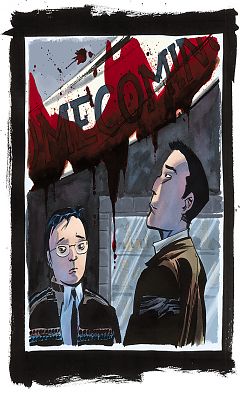 And it started very promisingly – I couldn’t understand what was supposed to be the problem. There were imperfections, some of them laughable, but let’s not forget that the first series had its silly moments too. What’s made me laugh about season two is the lengths taken to strip the most powerful of our Heroes, nasty Sylar and nice Nathan, of their abilities. The point, I guess, is that these two all-powerful characters just had nowhere left to go and convoluted ways of making them vulnerable again were the only option. To recap, Sylar could absorb the super powers of other heroes by doing something horrible and slicing off the top of their heads; Peter could also absorb powers by just, well, saying hello really. In the new series Sylar, lucky to be alive after a nasty brush with Hiro’s sword, is reduced to hitching a ride with some utterly tedious new characters and pulling very nasty faces in an “okay, so I’ve no powers, but I can still look real scary” kind of way. Peter, on the other hand, has simply lost his memory and is reduced to hanging out with some very dubious and unconvincing Irish people who make me quite uncomfortable because I am waiting for them to say “The Pogues, The Pogues”, “Roddy Doyle novel” or “I know a nice pub in Cricklewood”. Peter is reduced to pulling very convincing gormless faces in an “oh, I didn’t realise I could fly or makes things explode” way. He hasn’t lost his powers, he’s simply forgotten all the clever things he can do. And got gormless.

Elsewhere, Peter’s brother Nathan has developed the ability to grow a very impressive black beard. Nichelle Nicholls, Urura in Star Trek, turns up as someone’s gran, nicely complementing George Takei, Sulu in Star Trek, as Hiro’s Dad. Matt Parkman, the mind reading one, went off to meet his own Dad. I was secretly hoping his Dad to turn out to be William Shatner, but unfortunately this wasn’t the case. Mohinda, whose own Dad was bumped off by Sylar in the last series, is still wandering round trying to make sense of it all. He’s still pally with Mr Bennet, Clare the cheerleader’s Stepdad. And so on, into infinity. But still, as yet, no more cameos from Stan Lee to complement the comics theme.

There’s some good stuff though; Hiro’s exploits in feudal Japan are very entertaining, and Nathan and Matt are embarking on a dark story arc of their own. What’s possibly wrong with this series is that it is very literate. It’s like reading a very long, rambling and slow novel. There’s nothing wrong with that – it’s a great pastime – although an odd concept for television to adopt. But I like that; Heroes is daring to be overcomplicated and strange and bold enough to risk losing some of its audience. What I don’t like is it is very, very tedious at times and I’ve even nodded off, which is something I never usually do. Unless I’m just getting old. Hopefully I’ll make it through to season three where it’s rumoured that Leonard Nimoy makes an appearance as Stan Lee. Or something like that…

I agree with you Stephen. I gave up on it long ago because too many new and unnecessary characters were introduced, the plots became too murky and convoluted (or as you say, stupidly ridiculous), and all anybody ever did was stand around and blab at each other.

It would have been better if all the characters (and not just the Irish gang) were to start saying “The Pogues, The Pogues,” or maybe “Sean Connery wears skirts” or “Bloody hell, that’s Stephen Lang over there!” Anything to break the monotony.

Well I watched episode six last night and I was crying with boredom. No more, please, no more!