There’s been talk of a new Hammer horror film for some time. Almost a year ago I heard wind of something from the BBC but I didn’t get too excited about it. Now it’s official, but you won’t be seeing anything in the cinemas, or even on television or DVD, just yet. Hammer’s latest official production, their first for nearly a quarter of a century, is exclusive to Myspace. Beyond the Rave can be enjoyed in episodic form and the first few instalments (of twenty) are already available to watch.

A word of warning before you skip the rest of this post in your rush to go and watch Beyond the Rave: it’s probably easier to revive Dracula and Frankenstein from the dead than find your way around Myspace. I’ve always found it almost impossible to find anything on this site, let alone successfully log in. Particularly irksome is the “you can’t do that right now” message if you accidentally enter the wrong password, the endless loops you find yourself going round and the amount of bloody times you have to supply your date of birth. And they don’t tell you that this will only work in Internet Explorer, and that you’ll need Flash 9. And an awful lot of patience, with ideally a PHD in obscure Javascript error messages. 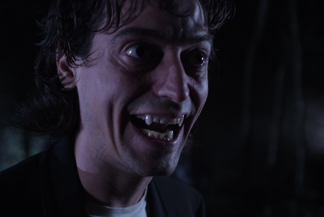 However. My expectations were quite low for this, but I found myself pleasantly impressed with what I’ve seen so far of Beyond the Rave. Those expecting the innocent charm of the Peter Cushing and Christopher Lee era will be disappointed, possibly offended. The new Hammer offering has a modern day setting and resembles (at least in spirit) the Hammer House of Horror tv series from 1980. But that was almost 30 years ago, and the web-only platform for Beyond the Rave means they can do pretty much as they like in terms of language, violence and sheer nastiness, although it still feels weirdly dated (do people still go to raves?). But don’t watch this clip if you’re easily shocked (of course you will, that’s like saying “don’t go down into the cellar” to an eager character in a horror movie).

The plot is quite dense and confusing, which suits the episodic format, but in summary it features a very youthful and potentially doomed cast in rural England, although they are a little more street wise than Hammer’s previous attempts at portraying realistic teenagers (look no further than Dracula A.D. 1972). The early episodes are well paced, although it doesn’t look like it will be long before it descends into the mayhem promised in the trailer above.

Personally it would have been much less frustrating for me if they’d stuck the whole of it on YouTube. But I see the reasoning in the Myspace approach – Hammer doesn’t want to have an immediate flop on their hands after waiting nearly thirty years. Although I imagine that Christopher Lee will absolutely hate this, and Peter Cushing will be turning in his grave.