I was planning on a Doctor Who review this weekend, but I’m so far behind on things that I’ve only just gathered my thoughts together on Torchwood! Besides, I’m still waiting for a half decent episode of the new Doctor Who.

Okay, the second season of Torchwood then. While it was an uneven ride, there’s been some superlative moments. So even if a few episodes were below par I’m still giving it nine out of ten. I love Torchwood because the BBC have delivered something so far absent from our screens; an adult British science fiction television series. Complete with adult themes and even gay characters who don’t scream their sexuality in quite the same way as a lazily thought out last minute addition to EastEnders. 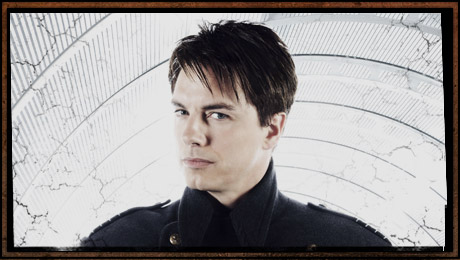 Torchwood is a spin off from Doctor Who, featuring John Barrowman as Captain Jack Harkness, a friend of the good Doctor’s who, after receiving Dalek extermination, is miraculously revived with the ability to regenerate himself (although not quite in the same way as The Doctor – he always comes back to life as John Barrowman). After The Doctor has abandoned him (rightly thinking him dead), Harkness attempts to follow him back to modern day Cardiff. Why? Well it appears that the Doctor frequents Cardiff because there in something called the rift there, which acts as a sort of cosmic fuelling station for the TARDIS. Oh yes, and the BBC base their production there. And Russell T. Davies is Welsh. Anyway, Captain Jack messes up slightly and ends up in 1869, having to wait around for 140 odd years before he runs into The Doctor again to find out exactly what happened to him. Not to worry, he fills his idle hours chasing aliens, being killed and recruiting members of Torchwood, a sort of youthful alien-dealing taskforce. And dreaming that one day he will be absolutely everywhere on UK television, from kids quiz shows to I’d do Anything, the excrutiating Oliver! singalong talent show.

Episodes 11 and 12 are my suggestions for some of the best tv this year. Episode 12 opened with an almightly explosion; four of the five lead characters in mortal danger. Okay, three – as remember Captain Jack Harkness can’t actually be killed. No, hang on – two – as Owen is already dead. A sort of walking dead. Still keeping up? This episode was great as it served as a Torchwood origin, delving back into the past lives of the main characters as they lie semi-conscious and dreaming. We see how cocksure Owen, the bookish Toshiko and the quietly confident Ianto were all recruited (the gorgeous Gwen taking a backseat as we’ve already seen her initiation right back in episode one, series one). Most satisfying was the start of a backstory for Jack’s missing years, showing his recruitment into Torchwood 1899 style, complete with sideburns and a dashing Adam Adamant style cape. Basically, it’s just great fun.

But the series also works well because it is often thoughful and character driven. Going back to episode 11, the gorgeous Gwen becomes involved in some intrigue surrounding a missing teenager who returns – startlingly changed – after a few months away. Some subtle thoughts about loss, motherhood and lost time. I found it oddly moving for a sci-fi show, and equally disturbing, especially the blood curdling scream that people will let out – and one that lasts for 20 hours – after looking into the heart of a dark star (similar to my reaction to I’d do Anything). Moreover, the storyline proved that working for Torchwood might not be the most fulfilling career choice, which was taken one step further in the final episode with the death of two characters (although one was actually already dead, if you see what I mean).

Like its sister show (or perhaps its maiden aunt show) Doctor Who, Torchwood‘s ears are constantly burning with all the idle conjecture that goes on in internet Who chat rooms. Some of the Doctor Who rumours and supposed spoilers are insane – and reading internet forums always spoils the enjoyment of the real thing, spoilers true or otherwise. But the clue is in the name I guess. Spoiler. But it’s inevitable; when recently interviewed by Mark Lawson, Russell T. Davies was proud of the Doctor Who mythology that’s built up since the show was revived in 2005. Its increasing complexity of backstory is all part of his masterplan, and Who fans need little encouragement anyway. Want to take a look? Visit the Doctor Who Forum.

Like Doctor Who, Torchwood has begun to attract quality actors all keen to make cameo appearances, including Ruth Jones from the brilliant Gavin and Stacey, Richard Briers and James Marsters. Marsters plays Captain John, a sort of Master figure for Jack Harkness, although so far less prominent than The Doctor’s arch foe. He’s equally fiendish, charming and very, very dangerous though. The series finale, spoilt slightly for me by the forums, featured exhausting antics you’d expect from anything associated with Doctor Who, including Jack buried alive for nine hundred years or so. Oh well, anything to stop John Barrowman appearing in everything…

I welcome the third series, less a character or two, when it hopefully returns next year. Now onto David Tennant and Catherine Tate…

Just curious, what’s wrong with the new season of Doctor Who? We haven’t seen any of them here in Australia yet and I thought the last season was fantastic. Don’t tell me they’re losing it…

It’s only three episodes in so I don’t want to be unkind but I really think that Catrherine Tate was a bad idea. The episodes just seem too rushed and too jokey. I watched episode three with two nine year olds – an acid test to see how good it was – and they were more interested in looking through a photo album.

Torchwood is the true ‘adult’ version of Dr Who. Captain Jack Harkness simply oozes a raw sensual sexuality (no, no, I’m still straight. Just) and the supporting cast are excellent (in particular Gwen). The plots are dark and not always uplifting: but not dark when it’s not needed – there are lighter moments and redemption is available for many…

It’s simply absolutely brilliant. I’m only disappointed that I only came to it about four episodes into series 1 (as frankly I didn’t like Captain Jack in series 1 of Who).

As for Who itself… Donna’s character has been much improved in episodes 2 and 3, and shows signs of being a well rounded addition to the crew allowing us to see some new sides of the Doctor, but none of the first 3 episodes have really inspired: the adipose was just silly, pompeii was a lot better but not quite there, and the planet of the ood ladled the morality on so much I thought it must be an American sitcom…

Bring on the Sontarans…

Yes I wasn’t mad keen on Jack to start with and was surprised when they gave him his own series. But it’s proved a good decision.

If they mess up the Sontarans I’m going to be in despair. I still have memories of them scaring me to death as a small child and have a weird soft spot for them.