Not long ago, at least it doesn’t feel like it was that long ago, I mused mid-season about Heroes. Now it’s all over, and as series creator Tim Kring has been reported apologising for the lacklustre second season, I may never get nearly as enthusiastic about it again. 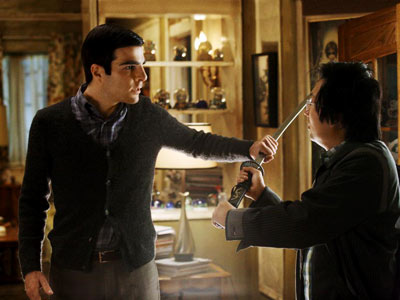 By far my favourite actor in Heroes is Zachary Quinto (pictured, quarrelling with real hero Hiro), who played the evil Sylar with relish. Quinto didn’t appear until a few episodes into the series with Sylar featured only that far as a shadowy figure in a baseball cap. Apparently Quinto wasn’t cast until the series had already started filming, so this is where Heroes has some similarity to Gone With the Wind, as Vivian Leigh wasn’t cast in her role either until after filming had commenced. But I guess that’s where the similarities end.

Quinto played the part with just about the right degree of inhumanity (and I concede that using your finger as a can opener to wrench open people’s skulls is about an inhuman as you can get), but he never went too far over the top. My favourite episode was where Sylar has his moment of doubt after realising he might be the one who’s going to write off half the population of New York in a rather largish explosion. He phones his old mucker Mohinder (“oh, hi Sylar!”) before descending on his poor mother who inadvertently makes his mind up for him. Cue snow globes and creepy blokes. But it was truly chilling television, and I call for the reviewer in the Radio Times who couldn’t see the point of this episode to be sacked. I think that it gave the inhuman just that short glimpse of compassion, which made it all the more frightening when you realised that he might have called the whole plan off. We need our film and movie monsters to prove that they think about things a little; it isn’t just about stealing brains. Sylar, Norman Bates, Dr Leckter; they’re all extremely clever. And this makes me more afraid of them.

The final episode of season one was both enjoyable and infuriating. Perhaps I’d built it up too much in my own head; I certainly didn’t want Sylar to die, because he’s such a good character. But as the whole theme was about destiny and it was Hiro’s destiny to polish the dastardly villain off then that was what had to happen for a fitting conclusion. But then they had to go and spoil things with a Hallowe’en style ending; we’ve seen it a thousand times before – camera returns to the spot where the baddie has died but they’ve miraculously got up and legged it …

Zachary Quinto is likely to emerge as the star of the Heroes mob of actors. He’s already been cast as the young Mr Spock in the new Star Trek prequel and there is something weirdly alien about his appearance, whether or not he’s wearing a pair of Vulcan ears. I shall look forward to him on the bridge with Jim T. Kirk, carrying his funny little handbag, arguing with his perpetually cross father and raising his eyebrow to Dr McCoy. A perfect piece of casting and I really can’t wait.

Just a shame he had to die/appeared to die but might come back (delete as applicable). But with such a huge cast, Heroes could afford to waste a few of them. The last episode ended with Parkman and DL in a bad way, poor Ted gone to the nuclear reactor in the sky, the Petrelli brothers creating their own and Malcolm McDowell and Julia Robert’s brother two very dead baddies. Perhaps they went too far with the body count. No wonder the next season is having to introduce some new blood.

My only real criticism of Heroes is that, at times, it’s a little too knowing. For example, I’m tired of spotting Stan Lee cameos in film and tv. But I suppose that we live in a reference filled world, and the more I think about it the more I realise that you have to become part of it all. Dig the references. Salute Nathan Petrelli when he says the self-referencing you saved the cheerleader, now let us both save the world. I’m the first to show my annoyance when people don’t realise who George Takei is, or don’t question me when I roll my eyes at Stan Lee. Okay, I have no criticism.

Favourite moments? There are just too many, and one of the joys has been watching several episodes more than once to savour the subtleties. In particular, I enjoyed it when Hiro and Ando journeyed into an alternative future where the worst had happened and Nathan Petrelli was a particularly nasty US President. But of course it was really Sylar posing as him, and second viewing revealed the excellent acting of Adrian Pasdar. My second favourite actor in Heroes. If you get a chance, watch this episode again. It’s Adrian Pasdar playing Zachary Quinto playing Sylar as President Nathan Petrelli. Awesome.

And of course I pity the people who started watching the series but then gave up and subequently didn’t enjoy all of the 23 episodes at least once. I refuse to answer the questions “was Clare’s Dad really nasty?” and “something about brains? – I haven’t really watched it” because I am proud of my Heroes superiority complex.

Season one of Heroes ended with a taster for season two; at least we know that Hiro is still with us. And I’m so glad that his thoroughly decent friend Ando is safe and well. And let’s hang on. The taster was rather intriguing, making use of the eclipse theme, and there’s already plenty of other online previews to look at, although I hear that production is currently in limbo. Let’s get this writer’s strike sorted in Hollywood. Now. Come on Mr Bennet, can’t you pull a few strings?

Keep the Star Trek references coming Heroes, because you’re the best tv show to come along since. Maybe my enthusiasm has returned…

Season two preview at the BBC

If you’re still reading, and if you’re as big a fan as I am, do you think Nathan and Peter are really dead? No, I didn’t think you did.

I started watching it, but after getting about halfway into the series, I more or less gave up on it because I’d never developed any real attachment to any of the characters (or any attachement I had had had* evaporated)

*and well done if you managed to follow that.

The younger Petrelli was just too weedy/goody goody — just like you want your baddies to have good human features, I want to see the goodies have bad human features too…

Clare’s dad was good for that reason, but there were other ambiguous characters too – like Nathan – but that didn’t become apparent until well into the series.

The second series is fantastic – the characters have more depth now we know (some of) them, I was shocked at Tim Kring’s apology for such a brilliant follow-up. I don’t understand what’s wrong with the American public, but I suppose it has lost the surprise factor of ‘what’s his/her super power?’ – and Hiro is more serious, which might have a lot to do with it. It is definitely worth watching and getting excited about.

I can’t wait for it actually. And BBC2 appear to be already trailing it, so it might not be long.
Odd that he did say sorry – makes your argument that season 2 is good harder to make to the naysayers.