Okay, a very unoriginal post title. Tap this into Google and you get 2,320,000 results. That’s a nice round number, but it’s still a lot. But how else to introduce one of the cleverest and most inspiring television series of all time?

So I have your attention. Good. Heroes, as that – if you hadn’t guessed by now – is what this all about, has finally proved to me that I have a slightly obsessive nature when it comes to tv. I don’t dip in and out of things. I give my full attention or none (which is why I usually avoid long running series); I’ve found I can become easily engrossed in long, intricate, absorbing, at times infuriating, at times very demanding television. For all of these reasons – and others – I love Heroes.

One of the most rewarding aspects of blogging is that people read from all over the world. I don’t claim to have a huge readership, but people have stopped by here from all around the globe. So it’s important to stress that this post is based on my enjoyment of Heroes in its current UK run of the first season, and we’re about halfway through at the moment. So anything I might say, any predictions about what’s going to happen, may turn out to be rubbish. I’ve already made this mistake over summer barbecues, where my theories about the series have amounted to nothing as it has brilliantly unfolded. I sometimes wish I could do a Hiro (character in Heroes – keep reading!) and teleport forward in time, watch the whole series on DVD, then teleport back to do the rounds of barbecues and dinner parties. But, hey, it doesn’t always work out that well for the real Hiro…

Heroes has been described as akin to the X-Men. Think more of Marvel Comics on the page rather than on the cinema screen here – Heroes does the Marvel thing of looking at the hangups of its superheroes. People with special powers but ordinary people as well. Peter Parker was Spider Man but he also had trouble with girls, he was pushed over and had his glasses knocked off at school. Being Spider Man could be a drag. The characters in Heroes also have very real and complicated lives to lead. Their special powers only serve to complicate them more. The cop who still directs traffic after years and years on the force without career progression. The mother of a young child, his father escaping from prison. The complications of life as a cheerleader. But that’s only one aspect. Heroes also reminds me of the long forgotten British tv series of the 1970s The Tomorrow People, where especially gifted individuals suddenly broke out into the world and needed help and assistance to survive and come to terms with thier gifts. Some just don’t make it through.

The series offers a mix of memorable characters (there are many of them) and iconic moments. Each of the heroes has their own unique ability, although some are more obvious than others, and some use their abilities to try to kill cheerleaders – rather than save them. Some aren’t even aware of their abilities at all, others find them a curse. Some just don’t make it through.

The most memorable character is probably Hiro, a Japanese computer programmer who discovers that he has the ability to both travel through time and space and to stop it entirely (he flirts for a while with the benefits of this and visits Las Vegas casinos to mess with time at the roulette table). During his first teleport, he travels into the near future to discover that an enigmatic comic book artist has the ability to paint the future – Hiro reads about his own exploits in a published comic – and he narrowly escapes some kind of global disaster as he ports back to the present day. Cue a very complicated plot revolving round Hiro’s plight to “save the cheerleader, save the world”, further paintings of comic artist Isaac (who can only incidentally, paint whilst on heroin), a serial killer called Sylar, more flashbacks and flash forwards and several other character who are yet to be revealed as either heroes or villains of the piece. Be warned, this is merely the briefest synopsis.

Heroes is great because it does sci-fi well; good and believable writing yet somehow endulging in the craziness of it all. It’s comic book stuff – it’s mad – but you fall for it all. You’re willing to suspend your disbelief because it’s all so well structured; especial care has been taken over this series. If you guess that something’s going to happen it probably will, but not in the way you thought. When Hiro warns Peter Petrelli, who has the ability to somehow absorb the abilities of others, to “save the cheerleader, save the world” we know he probably will – it’s how it all falls into place that’s so exciting. And whose abilities he just happens to absorb at the time.

And one last thing – anyone who has criticized this series for being slow is wrong – the reason why it gets so good around episode 9 is precisely because it has been allowed to breath and grow. There is a lot of attention to detail that is easily missed first time around. And what’s best about it is I really really don’t know how it’s going to turn out…

If you haven’t seen any of Heroes yet please do, and I might leave my predictions for the outcome of this series to one side and instead pay you a visit via teleport at a future barbecue (or should that be past barbecue?) 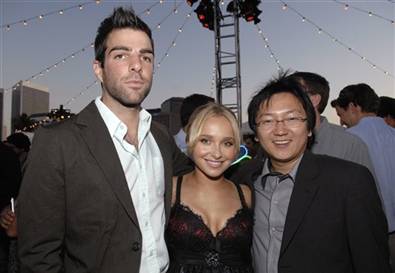 Characters from Heroes. Keep away from the one on the left! Run now!!

Yes, I’ve been very much enjoying it too. Also a great fan of Hiro (geeks rule!), but I also like like the slightly creepy woman who is good at persuading people to do stuff and also the cheerleader’s dad, as well as that bloke running for office (rather than his younger brother).

I like characters that sit firmly in the grey areas.

And yet, I’ve never taken to that Vegas ‘single-mom’ woman.

Yes, I like the cheerleader’s dad – I still can’t work out his motives and my initial theories about him were totally wrong.

Also yes, I don’t like the single mom too much – I think the episodes centred on her are the weakest.

I’d forgotten the woman who can talk people into stuff – she’s interesting. As is the creepy guy who can wipe people’s memories ("clean him out!") – and what’s all that about the funny tattoos?