In 2007 I was fortunate so see Grindhouse in a seedy Chicago cinema. Unsuccessful in its US release, the three hour collaboration between Robert Rodriguez and Quentin Tarantino was subsequently chopped into two releases, Planet Terror and Death Proof. Rodriguez’s insane zombie film and Tarantino’s chase movie received muted responses, stripped from the tongue in cheek Grindhouse concept, which offered a 70s movie feast complete with fake trailers for badly made films and even dummy adverts, the joke appeared to be lost on most audiences. Since then the two directors have followed entirely different paths, Rodriguez continuing in Spy Kids mode and directing a family film Shorts and Tarantino staying with familiar territory to deliver possibly his best work to date, the World War 2 drama Inglourious Basterds. 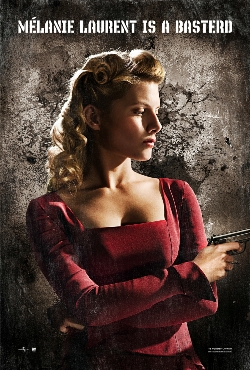 Inglourious Basterds exceeded my expectations, which were namely of a film featuring Brad Pitt leading a no nonsense troop of Nazi hunters in occupied France. This is of course part of the film, but like most of Tarantino’s best work, we are treated to an episodic feast and the best scenes, which consist of three of the director’s finest, do not feature Pitt at all. In many ways the band of Nazi hunters appears to belong in a different film, perhaps the Inglourious Basterds that Tarantino had planned for so long and put on hold, the one originally set to star Michael Madsen and Tim Roth that would have resulted in a different, and perhaps lesser, experience.

Christoph Waltz won best supporting Oscar for his role as Colonel Hans Landa, a role Leonardo DiCaprio was originally considered for. Waltz is so good that it’s almost impossible to imagine any other actor in the part, his two key scenes are the tensest on camera I have seen for some time. The film opens in rural France, where Landa descends on a family rumoured to be harbouring Jews. I think it is the best piece of cinema that Tarantino has made to date. We’re never sure where the scene is going, and the uncertainly lasts right up until its violent conclusion. Waltz portrays Landa with the right combination of confident authority and false obsequiousness; we never know just when he’s going to drop the facade and reveal the monster he surely is. His second scene, where he eats dessert with the girl he allowed to escape from his clutches, Shosanna Dreyfus (Mélanie Laurent), is equally gripping. I will never look at strudel again in the same light.

Inglourious Basterds contains the usual cross-references, odd themes and apparently deliberate mistakes you’d expect from Tarantino. It’s a film that invites multiple viewing just to understand some of its resonance (some things are just subtle touches like Landa’s fondness for a glass of milk that links the two scenes mentioned above, but I’d like to take a closer look at the director’s obsession with feet for example). The rich cast of characters features Winston Churchill (played by Rod Taylor) and Adolf Hitler, and Hitler is crucial to the film’s novel plot that draws several key Nazis to a Paris cinema where both Pitt and Dreyfuss independently plan to kill them all in a bomb blast or fire (it turns out to be both).

Although Waltz delivers the standout performance, Laurent and Diane Kruger (who plays movie star Bridget von Hammersmark) are also both superb, continuing Tarantino’s long line of fine female roles. And if it isn’t a contradiction in terms, Martin Wuttke also makes an agreeable Hitler. I was less enamoured with the last section of the film, which struggles with the magnitude of the final set piece. It’s a shame, because the theme of film and the role of propaganda was an excellent one. Landa, perhaps unwisely, is also turned into something of a grotesque comic figure. But the film works very well on several levels. There’s Tarantino’s usual self reference, where a scene in an underground bar turns almost into a parody of the three-way shoot-off in Reservoir Dogs. There’s also the clever use of language (the film features more German and French than English) adding much authenticity to an often fantastic series of events. And no review of a Tarantino film can conclude without mention of the soundtrack, which features some effective Ennio Morriconie-ish background music and an incongruous, although very effective, use of David Bowie’s Cat People.

As for Rodriguez, I found Shorts a failed attempt at something for children. This is an exhausting film featuring a gang of kids who find a magic stone, resulting on a series of wishes come true that include walking crocodiles and two-headed party guests. It was all too much for me, although I was overruled by my 11-year old film critic. So it does appear to work for its intended audience.

Grindhouse is the latest collaboration between Quentin Tarantino and Robert Rodriguez (an enduring partnership that includes From Dusk Till Dawn and Sin City). Planet Terror is an all out tongue in cheek zombie film, directed by Rodriguez, that’s shown back to back with Tarantino’s Death Proof. And there’s more – fake trailers and advertisements to give an early 1970s exploitation feel to it all. It’s over three hours long and, although enjoyable, this is really one for the fans. USA Today reported that the opening weekend for Grindhouse was disappointing, but there’s no way that this will ever find a mainstream audience. Since Pulp Fiction, Tarantino is happy to go down his own little alleyway into the weird and obscure and to take his pal Rodriguez with him.

Planet Terror sets itself some tricky challenges – to be both a decent zombie film and to be an amusing parody. Zombie films are as ubiquitous as the walking dead that populate them, and there are a good few very good ones from the last 40 or so years if that’s your type of movie. There’s even been an enjoyable spoof with its own scary moments ( Shaun of the Dead ). Rodriguez does reasonably well, Planet Terror is certainly sickening enough, both with the amount of blood spilt and the gruesome humour, but this film outstays its welcome by a good forty minutes. It’s not that I didn’t get the joke. I did – I just stopped laughing quite early on. But if machine gun wielding one legged table dancers appeal to you, don’t let me stand in your way.

Death Proof is less of a parody of a particular genre and more of the type of film typical of Quentin Tarantino. There’s the smart and intricate dialogue, a wealth of interesting female characters, the clever soundtrack and the sense of unease; on first viewing you have no idea whatsoever of where things might be heading. There’s also Tarantino’s clever use of an established actor who you may not have rated too much in the past. Think of John Travolta and Bruce Willis – both excellent in Pulp Fiction – or Michael Keaton in Jackie Brown. In Death Proof it’s the turn of Kurt Russell, who is excellent as a very deranged stunt man, and causes one of the best car chases I’ve seen in cinema for a very long time. A review in the New Yorker mentions it in the same breath as Spielberg’s Duel.

Ultimately however, the people chuckling the most at Grindhouse are Tarantino and Rodriguez themselves. I didn’t really find the spoof film trailers that amusing, and the reason for this was that the real film trailers preceding the main feature were more absurd. How can you possibly be more ridiculous than:

Hollywood films these days are spoof-proof.

The other jokes they throw our way also wear a bit thin; the deliberately grainy film quality, the spools that appear to jump and the ‘missing’ reels, segments of the films that just aren’t there. Rodriguez and Tarantino also lazily forget from time to time that we’re supposed to be in the 1970s, giving their characters convenient mobile phones and internet access. Or maybe that’s a joke I missed?

But I did enjoy Death Proof. I’ll need to see it again, but it could be one of Tarantino’s best. He’s not breaking new ground, but he’s not attempting to. He’s just having a great time being Quentin Tarantino. I still left the cinema with that post-Tarantino guilty feeling though; should I really have enjoyed all that easy carnage so much?