I found it hard to relax during Prometheus. Not because it was particularly frightening, although it does have its moments, but because I’ve been living in fear that this film would be a disappointment. It is slightly, and whilst it really inhabits a different universe entirely to Ridley Scott’s original Alien, there’s no real justification to condemn it too much. Perhaps there are too many comparisons to make, not just with the 1979 film but the countless other science fiction movies made since then which inhabit our memories and challenge any new offering with appearing unoriginal or dated.

Oddly, Prometheus reminded me somewhat of Mario Bava’s 1965 Planet of the Vampires with its tight fitting and uncomfortable looking leather spacesuits. This is a quirky coincidence, although I was forced to make comparisons with other films because there is nothing original in Prometheus to take away, the most memorable aspect of it being merely reconstructions of H.R.Giger’s original designs. 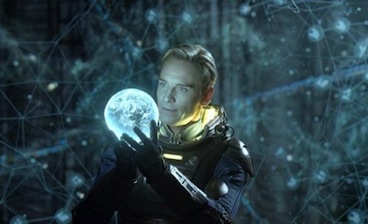 But there are good things in Prometheus. Despite a ropey script, Michael Fassbender is excellent as the android David, who is seen early in the film modelling himself on Peter O’Toole in Laurence of Arabia with dyed blond hair and clipped English pronunciation. An amusing touch, although I think Trevor Howard in Lean’s Brief Encounter would have been even better as a starting point for him. And I’m not sure where Guy Pearce is coming from in this film, appearing only briefly and made up as a very old upper class man (in looks at least, it feels like he’s hobbled in from the end of 2001).

Idris Elba and Rafe Spall are also good in support and Noomi Rapace is satisfyingly suitable in the Ripley-ish role, although there is a general lack of tension throughout. The best parts, where Rapace is in peril, are fairly sparse and Fassbender’s role in her fate is a little muddled. We never really find out if he’s a dastardly baddie or benign in a confused android way.

Overall the film does appear to lack some clear thinking, most notably the opening and closing scenes, which attempt to explain the role of the space jockey (glimpsed at the beginning of the original film) and what exactly he was up to. And fails at this really, unless I wasn’t paying proper attention. Or if that’s for the next film to properly iron out. Best of all probably is the scene involving Rapace and a self-administered Caesarean which does cleverly draw on Alien lore to make its effect felt. Other Alien-isms are scattered throughout, and I hope I’m not giving too much away when I ask this: you’d think by now that they would be able to fix an android’s head a bit more securely to its shoulders…