At what point would you quit looking for your two million dollars?

So asks Llewelyn Moss (Josh Brolin) at the start of Joel and Ethan Coen’s faithful and stunning adaptation of Cormac McCarthy’s novel No Country For Old Men. This is a thoughtful and compelling film, set in an increasingly violent Texas and Mexico of 1980, and one that deserves all of the praise it’s received as one of the Coen’s very best.

Moss is a man who can’t resist temptation, and stumbling across the bloody aftermath of a drug deal gone horribly wrong he decides to snatch the case of money he finds amongst the bodies. But he is blind to the true mess he has placed his family in; he can only keep running – from one seedy motel to the next as a psychopath called Anton Chigurh effortlessly hunts him down for the cash.

Although the Coens begin their film with a mournful voiceover and shots of a desolate and unwelcoming landscape, the cat and mouse game between Moss and Chigurh begins before we’re fully settled into our seats. Brolin is impressive as Llewelyn but it is Chigurh who shines in this film, played brilliantly by the Spanish actor Javier Bardem. Cool and precise, he’ll remorselessly disperse of whoever gets in his way, in one memorable scene lifting his boots whilst sitting comfortably and talking on the telephone to avoid spoiling them in the rising pool of blood from one of his victims. This really is a character you wouldn’t want to get on the wrong side of – he has a skewed and insane sense of justice that can’t be swayed, a law where fate is decided by the toss of a coin, and where innocent parties become accountable and ultimately doomed. 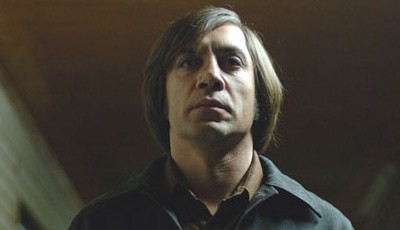 Bardem’s dark assassin contrasts neatly with the tired and laconic sheriff Ed Tom Bell, our opening narrator, played with a wise authority by Tommy Lee Jones. Where Chigurh is blinded by his own imaginary justice, Bell wants to escape the role justice has thrust upon him. He really can’t see where the bloody chain of events caused by Llewelyn’s foolishness will end, but at least will admit this. He’s not blinkered like the other three male leads (the third being Woody Harrelson’s over confident bounty hunter). An old man in an increasingly unfamiliar country, Bell wants to quit while he still can.

Where in my mind the Coen Brothers have been slacking in recent years (I think their last truly great film was The Big Lebowski), No Country For Old Men puts them back at the top of their game. And to their credit, they make little change to McCarthy’s original. This is a bold move, as where the novel more easily went against convention this is more difficult to achieve gracefully with cinema. The audience I was part of were perplexed at the film’s downbeat end, it didn’t go where they were expecting it to go and, where you can put a book down to ponder on its inconsequential narrative, films do make you want a more conventional ending. At least until you think about things later. Things in this film don’t tie up neatly, but I was left comparing the different perceptions of justice in Bell and Chigurh, and making the more difficult decision of whether Moss should have got away with the money – or not. It’s for you to decide when you see it, but don’t expect a happy ending.

The dialogue in this film sparkles, it’s probably closest to Fargo in this respect, although much of it is lifted straight from the novel. The Coens have done nothing wrong here, McCarthy writes wonderfully realistic dialogue, and they exceed in bringing the novel to life – enhancing rather than changing. Many of the book’s backdrops, the Mexican border, the hotel rooms and violent shoot outs – even the pharmacy where Chigurh makes a spectacular diversion – were exactly as I’d imagined them. It appears such an effortlessly made film, but I suspect that giving this impression is where greatness lies. And like the best Coen Brothers films, each and every performance, from major to minor character, is excellent. Without these touches some of the scenes, such as the memorable and uncomfortable exchange in a garage, wouldn’t nearly be as powerful.

The toss of a coin, the choices of the wise and the foolish, those who unwillingly become accountable and die, No Country For Old Men is a brilliantly subtle movie, miles above the type of film where, in an alternative and less realistic world, Llewelyn Moss would have got away with it.